Between Books - The Keys to the Kingdom 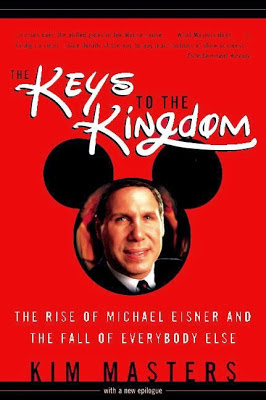 The Keys to the Kingdom: How Michael Eisner Lost His Grip by Kim Masters outlines the show business career of Michael Eisner including how his tenure at Disney began to disintegrate. Written while Eisner was still entrenched in Disney leadership, the book does not chronicle the complete fall of the CEO/President but does show the missteps he took that eventually led to his fall. The book is not a complete story but a highly dense and dispassionate description of Eisner’s leadership.

Masters focuses on the career of Michael Eisner. So compared to other books on the Eisner Era there is less information about the Board decisions that led to Eisner’s rise to leadership. Instead more space is given to his roles at ABC, where he developed Happy Days, and Paramount Pictures, which like his time at Disney did not end on good terms. Masters then goes into great detail on Eisner’s time at Disney especially the film slates that he developed with Jeffrey Katzenberg. The book concludes with a lengthy discussion of the Katzenberg-Eisner breakup and the compensation dispute that emerged.

With a subtitle that includes, “Lost His Grip” I expected the book to be extremely slanted against Eisner. Instead I found it to be dispassionate and factual. Yes there are a lot of failures detailed but they seem to be more fact and figures than the judgment expected from the title. It really is the Katzenberg-Eisner relationship that the book does document in great depth, including narrations of compensation trial proceedings. One cannot help but feel confused and saddened as the discussion breaks into he said/he said recollections with the one man who may have been able to end this issue, Frank Wells, deceased. And of course no one wanted to disparage Wells’ character. One cannot ignore the irony that Eisner who made sure to get his payout from Paramount immediately in a check that cleared the bank while he waited, blocked Katzenberg from receiving his contractually guaranteed bonus.

Detail is really the strong point of this very dense book. From the compensation trial to the fatal helicopter crash that took Frank Wells’ life there is lots of depth in this book. It does have a smaller focus than a book like Disney War. But what it does cover is done in great great detail and adds to books that discuss wider timeframes.
Posted by Between Disney at 5:41 AM