Between Books - Work in Progress 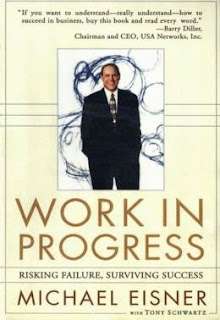 Work in Progress: Risking Failure, Surviving Success by Michael Eisner with Tony Schwartz covers the life and career of the former Disney CEO and President up until 1998 when Eisner was still under Disney employment. The book covers Eisner’s family and childhood, college years, and his early days in the entertainment business. The text outlines Eisner’s career at ABC and how he rose to a place of prominence where he caught the eye of key Disney stakeholders who proposed the partnership of Eisner as CEO and Frank Wells as President to help revive the Walt Disney Company in 1984. The authors then detail the key decisions that Eisner and Wells made in film, television, and theme parks to spark a renaissance of Disney creative content. Eisner describes his reaction to Wells’ death in 1994 and the interpersonal problems that emerged with head of Disney film production Jeffrey Katzenberg and Wells’ replacement Michael Ovitz. The book closes with Disney acquiring its own television network ABC and a statement by Eisner that he was entering a period of remaking Disney again. Ironically, one of the executives mentioned in those final pages Bob Iger would have a key role in this revisioning and leadership after Eisner’s departure.

The first question as one looks at the cover is what does “with” mean for the authorship of this book. The book is written from Eisner’s point of view. And Eisner recorded tapes of himself speaking on his life for Schwartz to use when crafting the book. Additionally, Schwartz both interviewed Eisner and Eisner associates, even following Eisner around as he went through his daily Disney duties. The heavy lifting of crafting the paragraphs and sentences was completed by Schwartz. But this is still Eisner’s book. The book contains his opinions, his memories and his perspective. And it is Eisner who had final approval.

Work in Progress is a very straight forward narrative that is shaped by Eisner’s opinions. So as a historian, one must note that pro-Eisner bias the book contains. The book was relatively slow reading for me as it moved from event to event. But I think a big part of the pacing was the formatting. The type is relatively small and each page is packed with words. So, I would warn you do not expect to go racing through this book.

Yes, this is Eisner’s book. So in those disagreements that he had with Katzenberg and Ovitz, it is his side of the story that makes the pages. I have my own opinions with both circumstances whom was more to blame in each of these dysfunctional relationships. But I think almost everyone would have to agree all parties had some blame. The sad thing is Eisner makes it clear throughout the book that his partnership with Katzenberg and his friendship with Ovitz were relationships he valued. Yet they were shattered. I do believe from my reading that Eisner did have a roll in these relationships moving into a downward spiral, but Eisner presents himself as relatively blameless. For example, I would find it difficult to present Katzenberg as the good guy in their disagreement due to his prickly and driven personality. But perhaps Eisner did not clearly communicate, which is not found in these pages. Additionally, Eisner clearly in Katzenberg’s settlement after leaving the company exhibited resentment. But these interchanges are not found in Work in Progress.

I do find that one figure that Eisner provides full praise for is the late Frank Wells. As a kid, I had no idea who Frank Wells was. Unlike Eisner, Wells did not enter my home on a weekly basis. He truly was the silent partner of a vibrant partnership, one that left a lasting mark on Disney’s legacy. If Eisner was attempting to fill the role of Walt Disney as a creative voice, Wells was filling the shoes of Roy O. Disney providing the financial and business expertise. Eisner makes it clear that he relied on Wells and was devastated by his death. And the neutral reader can wonder if Eisner was able to react professionally appropriate to his death as he attempted to balance stock holder needs with his own personal grieving. Readers must wonder if the negative picture of Eisner that some have today would have been different if the Eisner/Wells team had continued into the future as the two planned.

Another figure who receives praise through the book is Roy E. Disney. Eisner and Wells would have looked to Disney as one of the figures who helped land them the jobs of a lifetime. And professionally, he was a figure who helped link their leadership team to the Disney brothers. Eisner argues throughout the book that Roy E. Disney was a key figure in understanding both the Disney culture and animation. But one must wonder if the praise would be tempered by Eisner due to Disney’s role in pushing him out of Disney management after the publication of this book.

There are two projects that Eisner provides deep detail on that were failures. First, Eisner discusses in depth, often justifying, the development of Euro Disneyland. While Eisner’s early Disney career may have been marked by successes, Euro Disneyland was clearly an early financial failure due to cost overruns. Eisner makes the case for why Disney needed to pursue the European Park and notes some of the obstacles like French thoughts on the American park that they had to overcome. Though many of us Disney fans may dream of visiting this park and its take on classic Disney attractions, we must remember that it was a huge financial risk. Probably more interesting for me is his discussion of Disney’s America. For a park that was never built, Eisner shares much of the planning of this failed park. Eisner clearly believed in the concept and wished to see the Virginia park make it past the blue sky stage. The reaction from the affluent community and historians to Disney’s potential treatment of history is a fascinating tale for those who have immersed themselves in this discipline.

Work in Progress is not a quick read. It is a biased read. And regardless of the marketing blurbs on the book cover, it’s not a business how to book. For fans of biography and Disney, this is probably a must read. And those who were kids during Eisner’s years as Disney CEO may find this interesting. But it is probably not something that the general public would find great interest in. It cannot stand alone as the definitive work of the Eisner regime, though it does an excellent job of representing the Eisner viewpoint of these vibrant years.
Posted by Between Disney at 9:47 AM