Between Books - Storming the Magic Kingdom 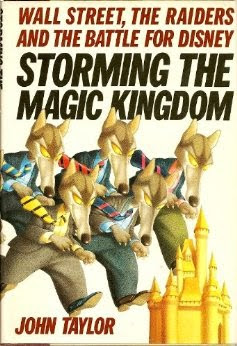 Storming the Magic Kingdom: Wall Street, the Raiders, and the Battle for Disney by John Taylor outlines a time when Disney’s fortunes did not look as bright as they do today. The long-term future of Walt Disney Productions in 1984 was in fact very much in doubt with questions of leadership and even if the company could be held together. And at the center of it all was the struggle between the heirs of Walt and Roy O. Disney and the future of their creation.

The majority of the action takes place in the board and conference rooms of 1984. With an undervalued stock and questions of leadership, corporate raider Saul Steinberg saw an opportunity in Disney stock. Steinberg potentially could have considered purchasing the company and liquidating the component parts for a massive profit. In an effort to defend the Disney legacy the company leadership explored a number of options including increasing the amount of stock available, a stock purchase of the land development company Arvida and the eventual paying of Greenmail (purchasing stock at above the market price) to Steinberg to eliminate his desires to purchase Disney. With the threat of a takeover eliminated however the company became embroiled in a leadership tug of war between the supportors of Walt’s corporate heir and son-in –law Ron Miller and Roy’s heir Roy E. Disney. In the end, the Roy side of the family would win out with the removal of Miller as Disney’s CEO and the hiring of Michael Eisner as CEO and Frank Wells as President.

This is a really enjoyable book. Now, it’s a book filled with behind the scenes details about stock purchases, proxy votes and board meetings. But Taylor does a good job in making those of us who do not discuss corporate finance on a daily basis educated to the realities of this world. And despite the fact that Storming the Magic Kingdom is an institutional history, Taylor helps bring the personalities of those in his pages alive. I could not help but feel saddened as Ron Miller faced the harsh reality that a company that he had spent his entire adult life at, that was his family’s legacy, no longer wished him to lead them into the future. Any Disney fan, regardless of business background, can pick up this volume, understand it, and might even find themselves learning better how the stock market works!

Really a big lesson for me in this book is that business is about people and personalities. I think that Roy E. Disney, who I do admire, is a good example of this fact. Throughout his Disney career he was marginalized by others. Some spoke of him as the idiot nephew. And I believe some may have forgotten that his father was a co-found of Disney. The fact that Roy E. Disney had a long history of being around and working in entertainment did make him comfortable with forming his own ideas for the company. These ideas were largely ignored! The fact that he was soft-spoken also led some to think that he was unintelligent. Instead he, and I, believed himself to be an intelligent man and a guardian of the Disney tradition. And Roy E. Disney believed change was part of his Uncle’s legacy. What one wonders is what could have happened if Roy E. Disney’s voice had been heard instead of mocked in the 1970s. Additionally, his cousin by marriage was seen by some as the handsome and entitled heir. Instead, in these pages he comes off as a man who has not been fully prepared for the role he has, but also another man who saw innovation as part of the Disney tradition and was concerned with expanding the business of his late father-in-law’s creation. Again, one can play what if’s if the Walt and Ron sides of the family could have come together. Disney history shows that the company runs best with two leaders with clear roles (Walt and Roy, Michael and Frank), could Ron and Roy E have led the company into a new renaissance together instead of waiting for the Eisner Era? Instead we now study a bad situation where all sides honestly must take a share of the blame.

Another proof of personality winning out or at least equaling is Roy E. Disney’s lawyer Stanley Gold and Arvida owner Sid Bass. With the purchase of Arvida, Bass became a substantial Disney stockholder. The fact that the two men found common interests allowed the two to build a friendship. That friendship would be a key to the alliance lead by Roy E. Disney to remove Miller and put their chosen management team into place.

Storming the Magic Kingdom is a fascinating story of the evolution of the Walt Disney Company. At the beginning of the tale the company was firmly in the hands of the intellectual heirs of Walt Disney. After attempts to raid the company and then placing through stockholder pressure a new leadership team was put into place with outsiders Eisner and Wells. That change led to a new peak of Disney entertainment and financial gains. But most of all Storming the Kingdom is a story about how business is really about people.
Posted by Between Disney at 8:18 AM