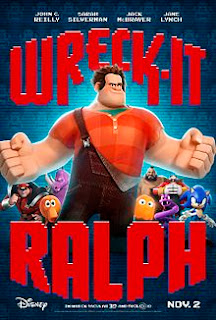 I am a little slow sometimes, and the Between Wife who saw the original Wreck-it-Ralph trailer only once put two and two together.

So it appears that the marketing campaign for Wreck-it-Ralph has reached the hearts and minds of the youngest members of the Between Household.

So, it’s the prefect time while the iron is hot for Disney to release a new trailer for this November release.

What did you think?  We have already seen much of the group therapy session.  But we get more video game cameos with Dig Dug and Sonic.  I really enjoyed the hit a guy with glasses joke.  But I kind of wish that we did not see how Ralph did in his tour with Hero’s Duty.  Still the Between House is pretty excited for this feature!
Posted by Between Disney at 10:49 AM