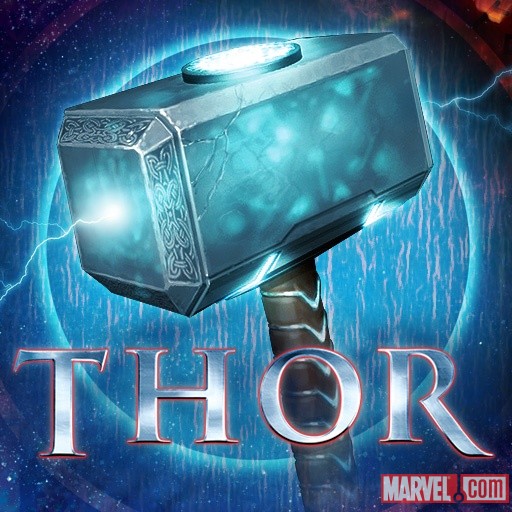 I love The Avengers!

This summer I saw the movie three times, including twice in the first 24 hours.

There have been a number of iTunes applications that have been released to promote and support the movie.  But to date I have not downloaded any of them because I generally do not pay for Apps (I am the only one in the Between Family with this philosophy).

Recently Marvel made one of those Avengers applications free for download for a limited time.  The application is designed for iPad and iPod devices.  Thor: Son of Asgard is typically, and will likely be again soon, sold for $2.99.  But with a window of time in which it is free I grabbed it.

In Thor: Son of Asgard, Thor’s brother and the main villain from Thor and The Avengers is again up to no good!  He has attacked and invaded Thor’s home of Asgard and Thor must overthrow his brother and his allies to reclaim his home.

The game play is a fighting adventure where Thor uses his hammer to defeat Ice Giants, Elves and more.  Thor walks (or runs) through levels fighting opponents.  The game provides hints on how to defeat new opponents and how to launch new moves.  But mostly it’s a lot of Thor Smash, to steal another hero’s line.

I usually don’t play games like this.  I found that I could get through the first three levels in around six to seven minutes a piece.  I did get defeated in the fourth level the first time I played it, mostly because I was distracted.

Visually the game has the right look and feel, it feels like a comic book game.  Each segment generally is introduced by a short video.  The scenes show wide-open landscapes, but the game will stop Thor from walking in some areas to keep you from wandering away from the game play.

Overall, I probably would not have downloaded this without it being free at the time I purchased it.  I am anticipating that I will more game play out of it that I did Fix-It Felix Jr. primarily because the scene does change.  But I personally do not tend to play games for the long-term so I anticipate that I will play it off and on for a few weeks but eventually replace it with something else, hopefully another free Avengers app!  And honestly it is The Avengers link that grabbed me as I await its home video release.