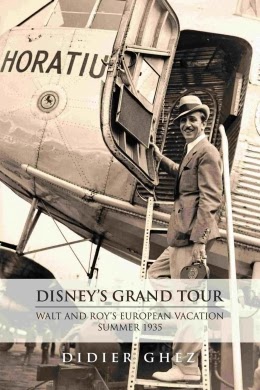 In the Summer of 1935 the Disney Brothers, Walt and Roy, along with their wives Lillian and Edna traveled to Europe on a two month trip filled with vacation and work.  The trip itself gave Walt a needed rest before he propelled himself into even more ambitious projects.  And the Disney brothers saw first hand the global reach of their products.  When the two returned home they were better connected, better prepared and better rested for the challenges that would come before them as they moved into feature animated films.

Disney's Grand Tour: Walt and Roy's European Vacation Summer 1935 by Didier Ghez outlines the working vacation that the Disneys took which included the United Kingdom, France, Germany, and Italy.  The book describes the general itinerary of the trip, the activities that four key participants took part in and those who they connected with.  As one reads through the pages, the reader finds a business man (Roy) who uses this trip to firmly establish subsidiary offices in Europe.  Additionally, readers see the artist (Walt) who meets with European creatives and collects European art books to grow the studio library at home for future projects.  And the reader joins two couples as they reconnect with each other on a trip that partially served as a second honeymoon and an opportunity for the husbands to reflect with their spouses on their World War I experiences.  Along with the facts of the trip, Ghez also addresses myths about the trip such as Walt Disney receiving a medal from the League of Nations and if the Disney's met Benito Mussolini.  Several photos from the time and some more recent color photos are found throughout the book, showing the reader the Disneys on the trip and the places they went.

Ghez's writing is clear and easy to read.  Though some may see this as a niche history book, it is really written in a style that any reader can enjoy.  In fact, some could see this as being a travel book as the Disneys explore Europe instead of a historical monograph.  Additionally, the text is well-researched and documented.  The archives he consulted span two continents and numerous languages.  And he was provided access to Edna Disney's diary which serves as arecord of the trip.  Ghez's notes are extensive and informative in themselves, for example studying the note #60 I learned about the career of Disney merchandising guru Kay Kamen's nephew George.  Disney's Grand Tour with it's extensive notes and references really is a mature historical narrative written by a serious and reflective historian.  If I was to complain about anything I would ask Ghez to give the reader a little more.  There are topics, such as a brief discussion on a clock, that I wish there was more material on to fulfill my own curiosity.  Of course, as I have found in my own research, there may simply be no more that can be shared at this time.

I really did enjoy the fact that this book is a story of two couples.  And I do not feel that Roy gets lost behind his more famous younger brother.  This may be due to the one of the main sources being penned by Edna Disney and Roy.  The book makes it clear that Roy was an active participant on this trip who had an agenda bigger than helping his little brother relax.

A six week vacation!  I go to Disneyland for 12 days and people call me crazy!  This was not that atypical during the early 20th century.  I myself researched a British officer who took a 2 month vacation in India.  Basically, this helps to show us that though it was less than 100 years ago, the world was a much bigger place.  It took longer to travel and communicate between large distances.  Therefore, to have a meaningful trip more time was necessary.  It was not like Walt and Roy were checking their smart phones every few minutes!  They were going somewhere that truly was half a world away and took more than a few hours to get there, honestly it took days to just get out of the United States.

With a price tag like $34.95, some readers may be scared off.  I am assuming that Disney book collectors and completests will find this a required book!  But what about the more casual or price conscious reader.  I was surprised to see that the Kindle version of the book is priced at $7.99 at the time of this posting.  Yet again independent publishers prove that content is king and getting it to the reader is part of the mission.  I myself read an electronic copy of the book and had an enjoyable experience.

Disney's Grand Tour by Didier Ghez outlines a key time for Disney creativity.  Walt Disney came back from his six week trip with a better understanding of the world and how they consumed his products.  And, he was able to get some needed rest allowing him to launch forward to new areas and grow his studio even more.  Disney's Grand Tour outlines not just a holiday, but a turning point in Disney history.