Between Books - Every Guest Is A Hero 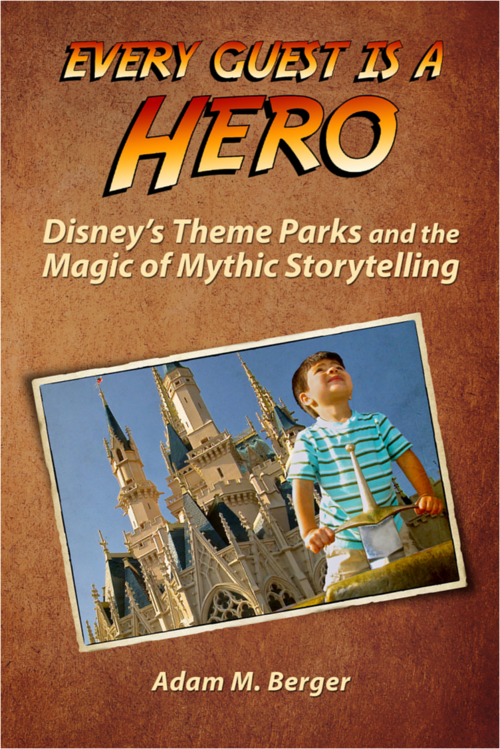 As a kid I grew up loving Star Wars.  George Lucas' creation defined my playtime (with a mix-in of The A-Team).  It was only as an adult that I came to understand the structure behind the Heroes Journey and heard the name Joseph Campbell who was an influence on the movie saga.  And as I became more aware of story, I came to learn that the structure that Campbell presented for an heroic epic was everywhere in both modern and ancient myths.  So I should not have been shocked to discover that storytellers who communicate in dark rides and roller coasters used Campbell's language.  But honestly I was!

Every Guest is a Hero: Disney's Theme Parks and the Magic of Mythic Storytelling by Adam M. Berger describes and outlines how Imagineers have followed Campbell's Hero's Journey within the parks.  "Part I: The Magical Myth Story Tour" provides an overview of Campbell's theories on mythic stories, including the an analysis of the four major movements of separation, descent, ordeal and return and it's component parts like the call to adventure and resurrection for the hero.  Berger also discusses the masks worn by characters within myths including heralds, mentors, and shadows and the impact they typically have on the stories hero.  "Part II: Mything in Action" analyzes ten Disney attractions, explaining how Campbell's model can be seen in the guest's journey.

First let me address the theories of Joseph Campbell.  I am familiar with his name and work but never taken the time to study his writing in depth (though I have name dropped him in order to sound cooler at times).  Berger treats the first half of his book as if his readers are novices to Campbell's writing.  And I think this is a strength.  For me he was able to put Campbell's thoughts into a form I could digest with examples from Disney films, Star Wars and the Disney Parks.  Therefore as someone who is a giant Disney fan, Berger brought me Campbell in a format that was understandable to me.  He used what I was familiar with to help me piece together the mythic structure and theory.  For me this was probably more effective than if I had read Campbell's writings.  I think I learned more because Berger translated the mythologist into my language, Disney.  And the chart on page 19 is an incredibly useful reference tool when exploring the book and thinking about other stories and how they follow the mythic round.

The chapters on the Disney attractions were also very useful to me.  They are not guidebook descriptions, at least none like I have read before.  Instead they are literary criticism of physical moving stories.  So as Berger takes the reader through the attraction he reinforces what he already taught you about Campbell's thoughts and shows you how Imagineers intentionally and accidentally mirrored Campbell's concepts.  At Mission Space, Berger shows you a new role for cast members as they become threshold Guardians directing you to the proper experience.  He takes you on Expedition Everest and asks if the guest or the Yeti is the hero, could you be the villainous shadow?  At The Twilight Zone Tower of Terror the screams of the guests in their ride vehicle call you to adventure, a call many choose to refuse.  And though you do not "die" as a guest at Toy Story Midway Mania, the energized feeling many feel as they walk through the exit serves a restorative function to the visitor.  These insights and many more to the storytelling the guest immerses themselves into provides new life to attractions we know so well, and something for even the most seasoned guest to look for in the future.

I enjoyed Every Guest is a Hero and I found it both educating and entertaining.  One could call it edutainment!  The writing is clear and detailed.  And I would have no problem recommending it to my friends who are interested in story.  In fact, for the literary types who struggle to understand why I like Disney parks so much this new layer of analysis may help them give the parks a second glance.  And I think Disney fans who want to know about Campbell should start here instead of other Campbell texts.  But I do not think I would recommend this book for everyone.  This is not a guidebook and it is not beach side reading for most.  This is serious literary criticism applied to dark rides and roller coasters.  So it may not be every one's cup of tea.  But for those who enjoy breaking apart Disney stories into fine detail, like Disney fanboys, this is going to be a favorite book.  I can easily see guests using the framework Berger has provided to build their own analysis.

As the title says, Every Guest is a Hero!  We love the adventure we find in the Disney parks, transporting us from the ordinary to the special worlds within the themed lands.  Adam Berger provides us insight on how Imagineers have setup our experiences so they speak to us in a epic mythic way.  And he provides us with a toolbox to dig into Disney attractions on our own and discover that we are the hero.

Posted by Between Disney at 7:56 AM