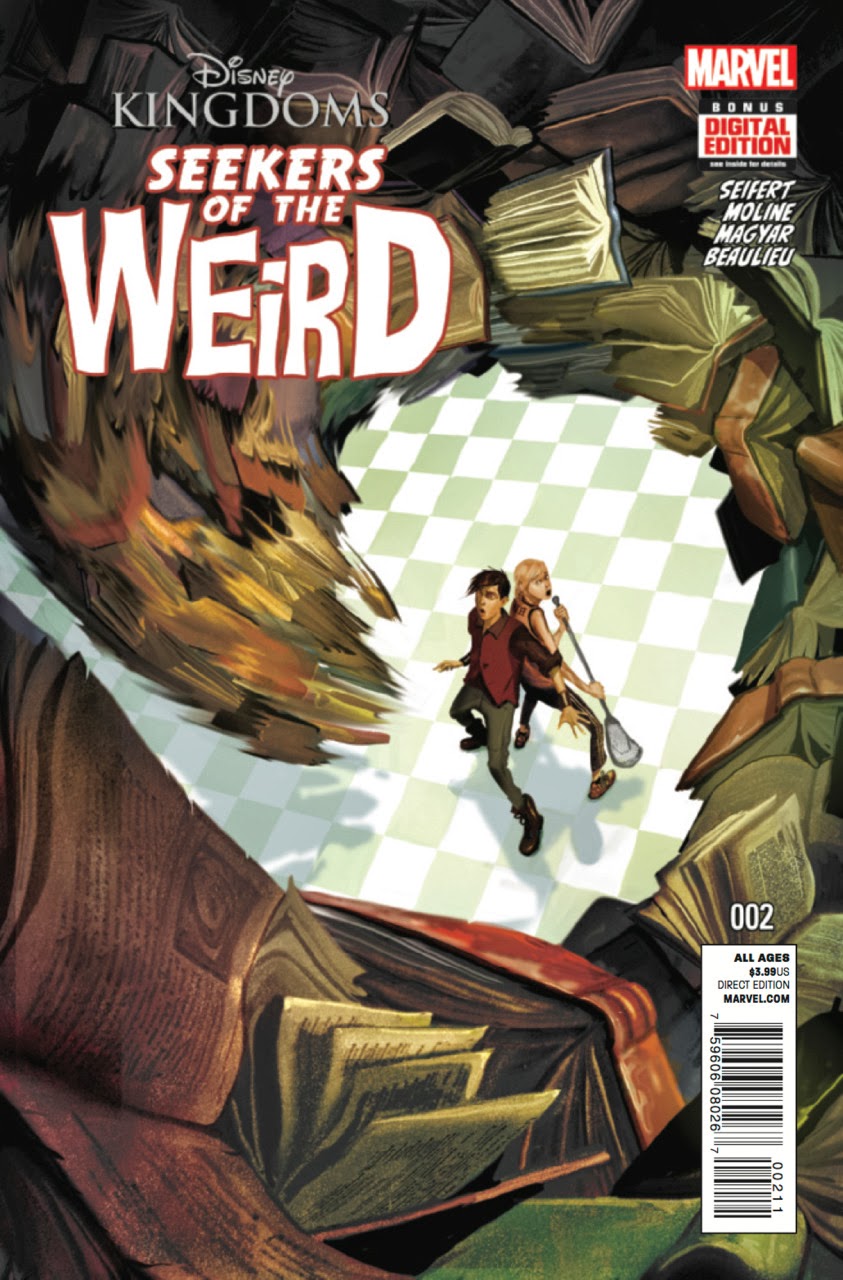 As Disney Kingdoms: Seekers of the Weird #2 opens, our heroes Melody and Maxwell have weird problems.  First, their parents have been kidnapped.  And if that is not bad enough their first meeting with mysterious Uncle Roland ends with him losing his legs.  Now Roland mentors the two youngster as they seek the Coffin Clock within the Museum of the Weird.  The two discover that the clock is wanted by the Shadow Society who kidnapped their parents.  And the kids learn that the Museum is the domain of the Wardens, who stored magical items within.  To save their parents the two must find the first ingredient to recovering the clock, a chair with a face!

When the Between Tween read the first issue, the response I got was I am confused.  When the Tween finished the second issue I was told that one should not have to wait a month and every issue should be collected together for one reading.  A day later, I was told that this was the Tween's favorite comic of all time.  I will admit, the fact this story has a young female who plays lacrosse scores a lot of points in the Between House.  And if one of the goals of this series to is get young people to read comics, Disney and Marvel are succeeding by giving us something different that superheroes.


As a comic fan I am enjoying this story.  In this issue we get into the action and the setup is minimized with much of our background setting complete in the first issue.  The story is horror, but  not so terrifying a young person cannot enjoy it.  You know like a certain mansion!  As a Disney fan I will admit what has impressed me is what Brandon Siefert has built upon the bones of the concept that Walt Disney and Rolly Crump developed.  In this case they provide us an entire mythology about who runs the Museum in the Wardens, its purpose and who are their enemies.  And I will admit this is the sort of mythology that can be used in a (wink wink) future series.

Based on the reaction here in Betweenland this weird concept, a comic built on an unbuilt attraction is working.  And I smile ear to ear upon the news issue #1 is getting a second printing!  Hopefully this is a sign of good things to come!