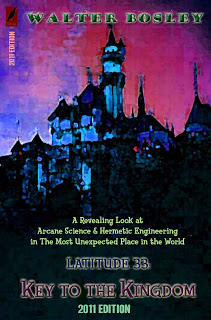 I think there is a good chance I have your attention now!  Amazon won.  Placed amongst the recommended titles for me recently was Walter Bosley’s Latitude 33: Key to the Kingdom.  The description hinted at magic fairies, time travel and my favorite vacation location all in one.  And for 99 cents on Kindle, it was worth a chance.

Walter Bosley in Latitude 33 theorizes that something wonderful and supernatural was included in the original plans for the Disneyland Park.  He writes, “Maybe Fantasyland was designed to serve as a literal gateway between dimensions by virtue of what populates it (Bosley, Loc 1119).”  Walt Disney welcomed his guests to enter a new and different land when they entered his theme park but Bosley argues that a real gateway existed from the parks opening in 1955 until 1982.  Bosley believes that he himself experienced the effects of this gateway as he met a gentleman he believed was Alfred Watkins, the discoverer of geographic lines of power called ley lines, in 1980.  Watkins had died 45 years earlier!  How could something magical be happening in the beloved theme park?  First, the theme park falls within latitude 33, well known for reports of the supernatural ranging from ghosts, fairies, aliens and more.  Additionally, someone realized that the location of Disneyland included the intersection of three ley lines.  And that someone created a supernatural portal within Fantasyland, which Watkins used to enjoy the park in 1980 years after his own death.  A kinetic device, the King Arthur Carrousel, sat upon the intersection of the three ley lines in the park, powering a portal that could have allowed time travel or journeys between dimensions.  In 1982, the portal was ruined when the carrousel was moved in the Fantasyland remodel.

Where does one begin?  Bosley’s theory is not going to be convincing to many readers.  Though it may be a fun concept to mull your mind over.  There is a certain charm about a book that argues that there are real fairies, at least until 1982, wandering around Fantasyland.  But skeptics will probably not buy into Bosley’s theory.  Additionally, the writing itself using a vocabulary around ley lines and other supernatural theories that may be an obstacle for some readers.  I admit it, during some of the descriptions of how the Fantasyland machine was built and used, my reading pace quickened.  But it appears there is an entire group of speculative literature that this would fall within and share a common audience with that I do not read.  And I am guessing many Disney history buffs will be in the same position.  I think one’s final opinion on Latitude33 will be based on your reading objective.  If you hope to be persuaded, you likely will keep your skeptical position.  But if you are looking for a flight of fancy, allowing yourself to believe that real magic exists within Walt Disney’s original magic kingdom, you will enjoy the imaginative trip.

I do have some thoughts on the whom behind the Fantasyland machine.  Bosley argues that C.V. Wood, who helped build the park to the extent he bragged he not Walt Disney should take credit, was aware of the ley line intersection and intentionally built the machine.  First, I think C.V. Wood would be delighted that such a theory would exist about his work at Disneyland.  From reading books including Buzz Prices’s memoir, one who may have actually been a friend to Wood (it is tough to know if Wood truly had friends), it becomes clear that Wood was little bit of a scoundrel and would have loved being labeled magical.  It seems to me that in many ways C.V. Wood was an excellent self-promoter, and this theory would have only added to his legend.  If he were alive today I could actually see him making statements supporting the book.  Second, much of Bosley’s reasoning for why Wood would have most likely been the architect of the machine is because Disney has stated little of him in their corporate history.  Bosley argues this proves something atypical was occurring because why would Disney be hiding the memory of such an important employee.  But I think the answer has simple non-supernatural answers.  Walt Disney and C.V. Wood clearly had a falling out, and Disney was not one to celebrate the efforts of those he was no longer on speaking terms with.  Disney as a company is notorious for hiding the legacy of out of favor past employees even today.  For example, we rarely hear Disney say anything positive or negative about from CEO Michael Eisner.  Disney has long used silence to their benefit.  And there was no Walt Disney Archives until after Walt Disney’s death and over a decade after Wood was fired.  In short, nothing of Wood’s contributions may have been kept!  This was a time when keeping materials lacked the urgency we see today.

Bosley does take the opportunity to bash the Eisner Era and beyond, “It seems the hunger for money from the park may have undermined its whole purpose (Bosley, Loc 1343).”   I have heard many a Disney fan express similar thoughts on Disney magic.  Bosley of course means that those responsible for moving the carrousel ruined the real magic for the love of money.  Many other Disney fans would argue that the not financially supporting maintenance and upkeep during eras of the park history has ruined the Imagineered magic.  If Wood is the hero of Latitude 33, then Eisner and those who worship money, in Bosley’s opinion, are the villains!

Latitude 33 has been poorly formatted for Kindle devices.  Some pages are largely blank after a line of two, with the ending sentence concluding on the next page.  Additionally some text blocks are oddly shaped.  In the end you get what you pay for at 99 cents.  But for a book trying to persuade you to accept a theory the formatting is a major detriment.

Latitude 33 by Walter Bosley for me was a flight of fancy and fun reading near Halloween.  I enjoyed the idea of real fairies within my beloved theme park.   The idea that Disneyland is built on a true magical intersection is truly fun.  But for me, it was just that, a flight of fancy.  It is enjoyable to believe in a little magic.  Perhaps I will be convinced in the future if the King Arthur Carrousel is every placed back on top of its proper home!  Who knows, maybe if the portal opened again, we could interview those Legends that we have lost!

Posted by Between Disney at 5:49 AM