Between Books - Three Years In Wonderland 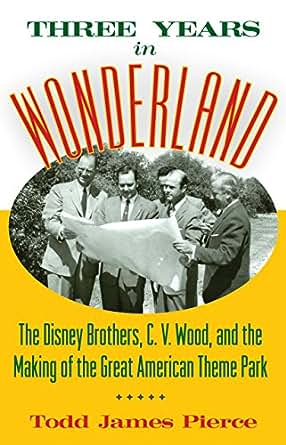 The Disney History Podcast did its job.  I bought the book!  Yep, I could not resist as I binged Todd James Pierce's audio segments.  But would the book fill the Disney history itch I wanted scratched?

Three Years in Wonderland: The Disney Brothers, C.V. Wood, and the Making of the Great American Theme Park by Todd James Pierce details the creation of America's first cinematic theme park, Disneyland, from the perspectives of the park's first General Manager C.V. Wood and Walt Disney.  We know from the beginning of the book that the Wood - Disney relationship is doomed to fail, though Disneyland would be a success.  Pierce provides readers biography of the wild yet charismatic Wood and his unlikely journey to Stanford Research Institute (SRI) and his early work with the Disney brothers.  Pierce adds information about Walt Disney's dream for a theme park and the efforts, especially financial, to get his theme park built. Pierce then narrates the construction of the park, including the attempts by Wood to bring his inner circle into the park management and perhaps enriching himself.  Finally, as the park survives its opening, the author outlines how Wood's relationship with Walt Disney soured, or perhaps never was amicable.  Overall, Pierce helps highlight in a way an official Disney book cannot and will not, Wood's contributions to the building of Disneyland.

I think it is a good sign.  I loved this book, but there is more I wanted from it.  First, I wanted more about C.V. Wood and his private life.  In the narrative, Wood is working in the aircraft industry and then we meet him again at SRI.  I would love to know more about how Wood changed industries.  Second, Pierce tells us that his habit of being a workaholic was an issue for his marriage.  Yet, Pierce discusses mostly Wood at work or play really only with his inner Texas circle, the Bombers.  I would love to hear more about his personal family life during his Disney years.  But perhaps there is no documentation of this period.

Three Years in Wonderland is entertaining and educational.  On the entertainment front, Pierce uses poetic license and flourish at times to make this history feel dramatic and very far from dry.  In the educational side, it really is Wood we learn quite a bit about.  Pierce reinforces that Walt Disney was the most supportive of his creative staff.  And Pierce places Wood within the financial circle of Roy Disney.  It becomes clear that Wood was not a Walt Disney favorite, but instead someone that was necessary not beloved.  And Wood did not cross easily into Walt Disney's circle like Admiral Joe Fowler who seemed to straddle the Walt-Roy division within Disney staff.  In many ways it becomes clear that the charming Wood was destined to leave Disney employment when he was no longer needed to help sell and build Disneyland.

Three Years in Wonderland is must read for Disneyland fans.  It is part soap opera, part history as experienced readers who have glances over Wood's names numerous times learn more about this enigmatic and invisible Disney, no not legend, myth.  In the end, the book scratched my Disney history itch and drove me to want to know more about wood.  Hint, hint...I would love a sequel that discussed Wood's post Disney parks and developments!