Between Books - Dali and Disney: Destino 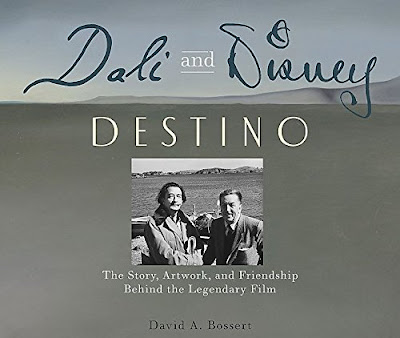 Dali and Disney: Destino: The Story, Artwork, and Friendship Behind the Legendary Film by David A. Bossert provides the history behind the famed short "Destino" including the relationship between artists Salvador Dali and Walt Disney before, during, and after the artistic development of the film.  Bossert goes beyond just this artistic pair to discuss the effort to complete the film led by Roy E. Disney which culminated in the short being assembled in 2005.  The book presents as a art of book for the short which includes Bossert's own personal efforts as a producer on the short.  And being a art of style book it is filled with wonderful Dali art and "Destino" concept images from Dali and John Hench.

Bossert gives the readers what is expected from an art book.  He goes into how Walt Disney came to know Salvador Dali and how Dali came to work for Walt Disney, creating a never made short in "Destino".  And while Disney fans may be thrilled with pictures of Dali riding Disney's home hobby train, it is the Dali background that went above and beyond for me.  Bossert provides Disney fans, assuming we knew much of Disney's history, with a discussion of Dali and his role in surrealism.  This helps one to understand images of watches, Dali and even baseball seen within the film.  The numerous images of both Dali's work and story concept art come together to help one better understand the final images of what is truly a complicated visual short.

One of my favorite discussions of the short's development is the role of John Hench.  This Disney legend worked beside Dali in the development stage.  And the two were in such collaboration that when Hench was asked years later to attribute if he or Dali were the creator of key art pieces, some he could never distinguish authorship for.

While Bossert does pick up on how Roy E. Disney shepherded the effort to resurrect the never completed short, including using Dali's concept art, test footage and the adapted song, what fascinated me the most was the story of stolen Dali concept art from Disney.  While we today see the Disney Archives as a top notch department, concept art was not as closely protected as it is now.  And an employee stole and sold art completed for "Destino".  Bossert outlines how Disney discovered this theft, how the art was found and Disney's efforts to recover it.  And even the efforts to recover the art can be interesting to the non-art expert

Dali and Disney: Destino: The Story, Artwork, and Friendship Behind the Legendary Film by David A. Bossert is a visually stunning art book.  It is one that goes beyond restating Disney history, but provides readers with the background needed for Disney fans to better understand Dali.  The text is filled with incredible Dali images both for the short and those key to surrealism.  And most surprising, it provides a somewhat exciting crime thriller as Bossert tells his readers of stolen Dali art.

Posted by Between Disney at 8:23 AM