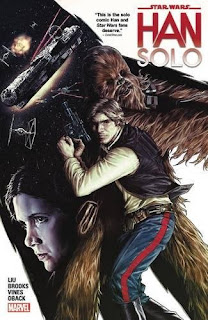 When I first saw Star Wars, Luke was my favorite.  But by The Return of the Jedi, Han was my favorite of the big three.  I mean, he did get the girl!  Maybe that says more about me growing up then the saga.  So hearing that Marvel was going to produce a Han Solo focused mini series really excited me.  But it scared me too, because what if it was not great!

Star Wars: Han Solo by Marjorie Liu with art by Mark Brooks follows Han Solo as he and Chewbacca are called into covert action by the Rebel Alliance.  Princess Leia needs a fast ship, and the Millennium Falcon is entered into the Dragon Void race.  At each stop, Solo must recover a member of a Rebel spy network including a traitor who has exposed their activities.  The scoundrel rebel has to balance the competitive nature of his fellow racers with the stress of Imperial entanglements and antsy Rebel spies.  If forced, which will Han choose...the mission or the race?

Overall, I was happy with Liu's story.  It is a straight out adventure tale with a hero I like at its center.  While the story is not overly complex, it does leave the reader wondering who the traitor is?  And we get to witness Solo's tension.  Leia made it clear, the race is nothing but a cover story.  In the end if he must choose it is the race he is to abandon.  But can he do that and still be true to his nature?  To me the story really does not take us deeper into Solo's personality, really with the reader getting the smuggler we expect.  The story does give us foreshadowing to his post rebellion career, as a race promoter.  And it helps connect dots to the older Solo and his love of racing.

Star Wars: Han Solo is an adventure romp.  It does not add deeply to the canon.  But it likely gives Solo fans like me something we want, more screen time!

Posted by Between Disney at 6:49 PM