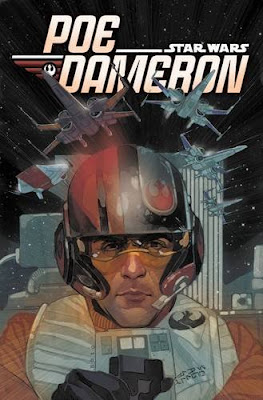 My impression of comics writer Charles Soule is he is solid.  He writes good stories, but not really what I would call outstanding ones.  Though I have really enjoyed some of his runs, like She-Hulk.  But up until a few weeks ago I would have found him an odd mix for something in the Star Wars galaxy.  Soule's a superhero guy I would have proclaimed.  Then a few weeks ago I introduced myself to his Letter 44 independent title, which is a deep character story based within a science fiction world with a great twist.  So maybe his inclusion in the Marvel Star Wars properties was a better match than I imagined.

Star Wars Poe Dameron: Black Squadron by Charles Soule with art by Phil Noto appears to take pilot Poe Dameron up to the opening of Star Wars The Force Awakens.  General Leia Organa tasks Dameron with keeping vital information away from the First Order, by finding it first.  He is assigned finding Lor San Tekka who has information about the location of the General's missing brother Luke Skywalker.  To complete his task, Dameron recruits his own squadron made up of pilots that are more family than friends including Snap Wexley.  Dameron's search for Lor San Tekka takes his Black Squadron to isolated settlements and intergalactic prisons.  To make his task even more difficult, Dameron is challenged along the way by First Order intelligence officer Agent Terex and a mole within the Resistance relaying information about Black Squadron's objectives!

I really enjoyed Star Wars Poe Dameron: Black Squadron.  I found Soule's story to be solid and often riveting, especially on the prison planet!  And Noto's art is solid with me believing that Dameron, Wexley, L'ulo and others were the Resistance fighters we saw on the big screen.  In many ways this story is great because it gives Dameron and his team more screen time then they got in the movie.  So while readers may feel like they know Wexley from other books, this really gives us an insight to these personalities as we get to watch Dameron for example lead, including pilots much older than him, and scheme in order to achieve his mission.

If I was going to make one complaint I would ask this title be renamed Star Wars Poe Dameron and BB-8. I do love how in literary offerings that Dameron always calls out to BB-8 as Beebee-Ate!  It really feels like a great extension to the films with Dameron drawing out his name.  But again, fan favorite BB-8 is as much of a partner than any member of the squadron.  And while he may give too many thumbs up, he is fun, interesting and always engaging on the screen even if his panels are often only filled with beeps and clicks instead of narrative.  In many ways that is a tribute to Soule and Noto that wordless pages still feel weighty to the story!

I was nervous about Star Wars Poe Dameron: Black Squadron but now I am thrilled to know that more volumes of Poe Dameron's comic adventures are on their way, I had the impression this was a limited series.  I loved getting to see Dameron do more than sit in a cockpit but be a Resistance leader in action.  And Marvel gives Dameron the screen time fans hoped he could have.  For those who read across the entire Marvel library of titles, there are even connections to other titles that help show you the story at another moment!  Honestly, this is another fine contribution to the Marvel Star Wars library.