Between Books - The Art of Star Wars The Force Awakens 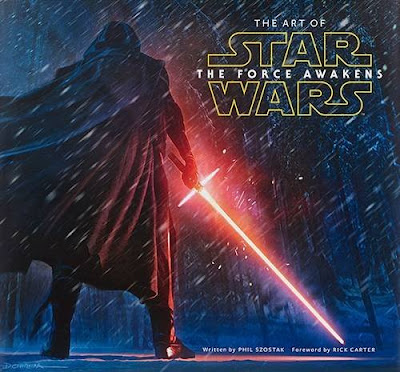 Yep, Disney fan makes me a Star Wars fan...actually I was that years before Disney bought LucasFilm.  After enjoying some of the other Disney and Marvel Art of books, I had to add The Art of Star Wars The Force Awakens to my Between Books collection.

The Art of Star Wars The Force Awakens by Phil Szostak guides readers through the development of Star Wars The Force Awakens.  The book is a visual guide to the creation of the film from pre-production, into filming and finally post-production.  Readers will discover a very different story as early versions of the film focused on Kira and Sam, not Rey and Finn, with Jedi Killer in the place of Kylo Ren.  While Szostak provides text that describes the formation of the film it is really the pictures that highlight the story of film production.  Readers can spend hours exploring the pictures, contemplating the ideas that did and did not become part of the finalized film.

The Art of Star Wars The Force Awakens is truly an enjoyable and fun read.  I read it twice.  One read was with the Between Kid, as we mostly focused on the pictures and discussed images and ideas that moved forward.  For my second read, I slowed down reading the text which really discussed how ideas evolved.  Readers come to understand how loose the production of a film can be.  LucasFilm unleashed a team of visual artists to create concepts, many of them strikingly beautiful but unused.  And these images helped to progress the story, not just Disney's and J.J. Abrams revisions to the original George Lucas script.  Many of the visuals are literally what if ideas, ones that would be fantastic to see in the future.  It also becomes clear how Ralph McQuarrie, the original Star Wars visual designer inspired a new generation of artists in both how they dreamed and how they copied much of his own work.

Star Wars fans need to read The Art of Star Wars The Force Awakens.  It is a fantastic look into film making and the creation of 2015's biggest film.  It is personally a must have for Disney/Star Wars fans who want to know more about how the new Star Wars films are created.

Posted by Between Disney at 6:31 AM