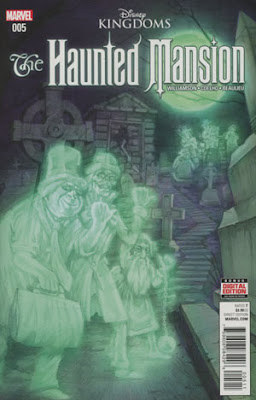 Haunted Mansion #5 concludes Danny’s tale. Danny gets out of the Mansion. But he jumps right from the Mansion and into the graveyard. But Danny is not the only one who escapes as the Captain is closely following his heels. Danny and his spooky friends have to face off against the Captain in one last boss battle. And we can be glad that Danny is outside as he can now count on those beyond the Mansion to help defend him.


Joshua Williamson and Jorge Coelho do wrap up their story. And as a treat Coehlo gets to draw one last classic Mansion scene, the graveyard. The story is ended and gives satisfying conclusions to the story including what happens after the boss battle, where was Grandpa, and what do the survivors do next. Though, I would have liked to see our hero have a slightly more engaged role in the conclusion. And I would have enjoyed a major return of the Hatbox Ghost. But overall, as an adult Mansion fan I was pretty satisfied though the tale may have lacked the story complexity I would have desired. But for the Between Kid the story was a huge success where the Kid was excited to dive into each issue with me.

Interesting! Of the first four issues, the sales for three issues were well over 20,000 copies. And the one that dipped was issue #3 with the next issue rebounding. That is pretty impressive and largely steady sales. I can believe that based on sales and popularity of the franchise we could see a Haunted Mansion return. And I would be all for it, because the Between Kid loves this story while feeling safe about something that can be scary. And I hope the Kid will be more excited about future tours through the real life attractions. And in the end, that is what really makes me hopeful and happy with these comics!

Posted by Between Disney at 6:49 PM