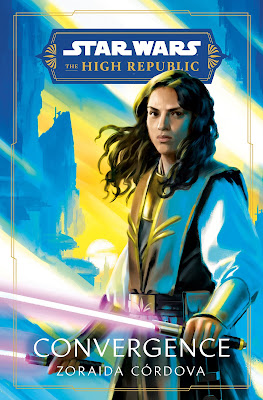 Not that desert planet!

Not those star-crossed lovers!

Not that handsome rouge!

Welcome back to the High Republic!

Star Wars: The High Republic Convergence by Zoraida Cordova continues the Disney/Lucasfilm experiment of giving us Star Wars without a Skywalker. Star Wars’ books can be hard for me as this is a visual universe, yet I can’t stop reading them. I blame the collector in me. I just wondered if this would fare better for me than my last outing in an era before the Clone Wars!

Somewhere on the edge of the Republic, two planets that we have never seen in the Star Wars universe are in an endless war. The Republic and the Jedi send aid and attempt to end this conflict. But it is really the role of a royal from each planet to solve this problem and help these worlds move forward into peace. Outside of this resolution, a threat we’ve seen before in the High Republic lurks in the shadows hinting of more schemes and conflict to come.

I have intentionally left the names of the worlds, Jedi, royals, and other details blank. To be honest, other than name-checking Yoda, Coruscant, and Jedha there is not a lot of detail that ties this book to the rest of the Star Wars universe. I prefer to think of this as a standalone story that does not rely on Star Wars details to make it work. To me, the central characters are the royals and their struggles for peace and everyone else including the Jedi are really set decorations. Now that being said, I think that this book is attempting to move forward the struggle between the Jedi and a threat that we have seen elsewhere. But other than the Jedi and the antagonist who hates the Jedi, there is not a strong connection to other High Republic books.

I will admit, this was a hard story for me to get into. And it could have been in the first 20-30% of the story I was trying to slot the tale into Star Wars and the High Republic. Once I made it a story of the two young Royals who by this time in the book were better fleshed out, it was a more enjoyable read. But the struggle with the whole High Republic concept is trying to create new Star Wars without the figures we know at least in support. And it may also be lacking in the fact they are not or cannot use the figures from comics and books that fans love and are no longer considered canon. I feel like they are attempting to not overexpose Yoda during this timeframe, and maybe it’s best to toss him into the center of a story.

Overall, Star Wars: The High Republic Convergence by Zoraida Cordova did better for me than the last outing in the High Republic. But that is because I focused on the two completely new characters who were not Jedi and had literally the least to do with anything Star Wars that I read before. I’ve heard Marvel and DC authors state that the key to pitching a story is not to make it a Spider-Man story but make it a story that functions with a hero who may remind you of Spider-Man. In the end, that’s how I chose to read Star Wars: The High Republic Convergence. The Jedi became wise warrior wizards to me. The Republic was an outside intrusive and also helpful government. And the unseen antagonist…I just tried to push them out of my mind. Because I think without the baggage of Star Wars I would have gotten into this story faster and more intense.

Posted by Between Disney at 8:25 AM