Between Books - The Imagineering Story 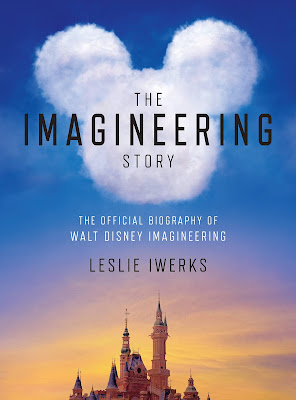 Don’t get me wrong, bricks are good. Bricks give us firm foundations.

When I ordered The Imagineering Story, I saw the 700-plus pages and had a thought. It’s an oversized art book? That many pages just have to be filled with a lot of pictures, definitely more than text. It will definitely be artful, fun, and light.

There are five pages of pictures…and all in the front of the book!

Stop thinking art books, and start thinking 700-page fiction fantasy or thriller because this book is just as wild of a ride as any of those! And it is all words my friend!

The Imagineering Story: The Official Biography of Walt Disney Imagineering by Leslie Iwerks is more than a companion to the Disney+ series of the same name. She documents the actions of Walt Disney Imagineering from Walt Disney to the Star Wars: Galactic Starcruiser. She draws a line of artists, creators, and business people who shared a common mission, “to create fun.” Iwerks provides a deep narrative that moves from park to park and milestone to milestone for Disney creatives. While giving us a history of things and events she adds multi-page biographies of Imagineers that often includes how they were recruited by Imagineering and their impact on an important project. The writing is clear, detailed, and consistent. And while it is not an academic press, it is clear that Disney sees this volume as exactly what the title claims “the official biography.”

Let’s get into the nitty-gritty. Iwerks overall keeps a calm tone. It is one that neither gets too high nor too low, it is honest and consistent. So while readers may come up against names that give them internal frustration, Iwerks avoids name-calling and dirt-digging. Everything is neither always good and never always bad. It is just frank here are the facts. It is likely this tone that allowed her to talk about some low points in Imagineering history in both the book and series in a Disney-sanctioned program. Let’s be honest, Disney does have a tendency to paint a rosy at all times picture. And Iwerks does not have to run away from the bad times for employees and the parks. I am still shocked that Michael Eisner was given such a big role in her series, and I am all for it. In the end, Iwerks can go places that maybe Disney marketing may not have preferred because to be blunt she wasn’t looking to flame anyone, she’s just providing facts.

Personally, I really liked her biographies of Imagineers. And yes as expected we get our Tony Baxters and Kevin Raffetys and other well-known figures. But I must admit, I was shockingly under informed of the career of Disney Legend, and guest star of The Mandalorian, Wing Chao. These biographies also answered questions for me about some Imagineers I saw in the program. For example, Doris Woodward was a new to me Imagineer, and Iwerks has time on the page to give us the background on this key leader for Shanghai Disney. And maybe these biographical asides were my favorite part as they allowed me to connect with people.

As Disney fans, we have dreamed about staying overnight in a Disney park. In the United States, we dream of winning an in-park suite for the night. Or we daydream of getting locked in by accident. Internationally, we may have the opportunity to stay in a Disney hotel in a park. But in 2011, 70,000 guests were marooned in Tokyo Disneyland and Tokyo DisneySea after a devastating earthquake and national tragedy. This is not how I would like to be staying overnight in a park, especially with cold temperatures. And Iwerks’ retelling of this incident has stuck with me. It shows that we may not know everything and The Imagineering Story has so much Disney history something that you’ve never read about is going to be in here. And Iwerks’ clear writing creates drama and tension.

The biggest personal issue I have with the book is a lack of an index and a lack of cited sources. Lack of index is likely my biggest future problem. This book is huge. And really one does need a map to go back and find content for future projects. Even writing this review required me to dig to confirm content a little harder than I really wanted to. Have I mentioned this book is huge? The lack of citations I am going to give her a pass on. Iwerks is a filmmaker, not a historian. I have a history background and I like to see the work. Iwerks relied heavily on interviews and internal sources and when quoting someone she always gives you the speaker in the text. She had access to the Disney Archives and most of all the people who lived the creations. We must remember that Iwerks is the granddaughter of Mickey Mouse’s co-creator and the daughter of a Disney film legend. Disney Legend could be the family crest! She is more focused on telling a story of creating fun, and her lack of citations keeps moving the story she’s telling forward of creativity and innovation.

In 2023, we enter the one-hundredth year of the Walt Disney Company. The Imagineering Story is the beginning of a book program to support this milestone. And Leslie Iwerks gives us the first good brick in the magical year’s foundation.

Posted by Between Disney at 2:42 PM