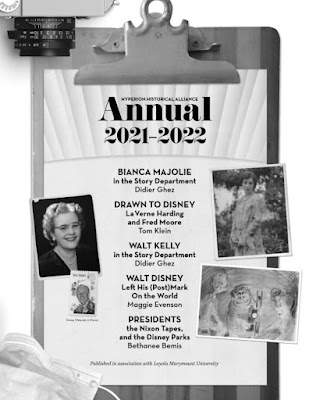 I blinked and somehow the third Hyperion Historical Alliance professional journal escaped my notice. And then I saw it on Amazon…at a price that is simply a steal.

The Hyperion Historical Alliance Annual 2021-2022 consists of 5 scholarly articles on different topics in Disney History. “Bianca Majolie In the Story Department” by Didier Ghez delves into Walt Disney classmate Majolie’s time and contributions to story. “Drawn to Disney: La Verne Harding and Fred Moore” by Tom Klein discusses the influence of Disney Legend Moore on animator Harding at a non-Disney studio. “Walt Kelly in the Story Department” by Ghez outlines the contributions of Kelly in story. “Walt Disney Left His (Post)Mark on the World” by Maggie Evenson narrates the history of Disney postage stamps. And “Presidents, the Nixon Tapes, and the Disney Parks” by Bethanee Bemis chronicles presidential visits in the United States parks.

Overall, the Annual is scholarly writing. They are essays that have been researched and documented just like one would expect to find in the Journal of Insert Discipline Here. And that is really the point as the Hyperion Historical Alliance attempts to frame the group as a scholarly endeavor. For me, the most impactful essay was by Klein. The entry helped to flesh out a portion of Moore’s life for me, his exile from the studio. But it was also a strong reminder that due to prejudices, the Disney studio was not all it was meant to be. Harding was a wonderfully talented animator. But as a female professional, she would not be able to enter Disney at the position she had earned. I believe I spent around $3 on this journal. And that essay was well worth the purchase to me.

Of course, my yearly grumble is the lack of democracy among the Hyperion Historical Alliance. They want to be a professional organization taken seriously. So they have done much to close membership and stay labeled as scholars. While other organizations like the Society of Baseball Research (SABR) have sought to crowdsource research and build a community. I honestly would be very willing to pay $30-$40 for a copy of the journal, an online community, meeting discounts, and maybe a webinar or two. I heard Ghez discuss a PowerPoint presentation given to members about project status. And I would have loved to see it discussed. So yeah, there’s my yearly plea to consider opening up membership at a supporter/ally level. Because we Disney fans have some power and we want more Disney history.  I see that Heritage Auctions supported the publication of this latest edition, and I think Disney history fans would support this effort also.  And I would remind everyone that SABR has done an excellent job promoting baseball scholarship to the point I have been associated with history departments that taught baseball history seminars.

Posted by Between Disney at 1:51 PM