Between Books - Star Wars: The High Republic Path of Deceit 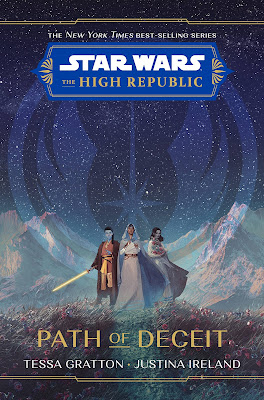 Okay, we have actually been here before. Welcome to earlier in the Star Wars: The High Republic than we have ever been before!

There is a lot of talk about the Force!

There are some young ladies with a name we have seen before in Star Wars: The High Republic!

And look over here, there is a ship that will become important later!

Yoda is not in the building!

Star Wars: The High Republic Path of Deceit by Tessa Gratton and Justina Ireland opens up a new chapter within Star Wars: The High Republic. Years before the creation of Starlight Beacon space station and the attack of the Nihil on the Republic, a Jedi, and her Padawan Kevmo Zink are tasked with finding stolen artifacts rich in the Force. They believe that on the planet Dalna, a group called the Path of the Open Hand is connected. The two investigate with Kevmo meeting the young Path member Mardo Ro who brings brightness to Kevmo’s life and challenges his beliefs about the Force itself. Kevmo and Mardo navigate the tension between the Path of the Open Hand, Jedi, and a plan that is greater than two young people.

Star Wars: The High Republic can be hard for me. I am convinced that Star Wars is best when visually presented. The mind needs visuals to see the whole magnificent picture. So, as we are invited into a tale that has no characters we have seen on the screen or in comics, LucasFilm is asking the authors to take on a hard task. They have to provide us information about where we are, hints to what is to come, and characters that we need to care about…and quickly. And they need to deliver the request at a young adult reading level. And I am a Disney adult, which I am sad to say only really means young at heart. This meant that Star Wars: The High Republic Path of Deceit did not work the best for me. The authors complete their charge, a young adult novel earlier in the High Republic than we have gone before. But I found myself asking the bigger questions; first, why did they not continue from the end of the last major event publishes in the High Republic instead of jumping backward? Second, I have friends who question the distribution of television series as they do not want to watch every episode of Star Wars: Rebels to understand what is occurring on Disney+. Is it possible by not giving us familiar characters in publishing that some of the hardcore readers may be turning away as the non-core asks this question?

Star Wars: The High Republic Path of Deceit has some familiar story threads. And the text has concepts that tell you that you are in Star Wars. And the authors clearly completed their assignment. But perhaps Disney executives should be reviewing their strategy in greater detail.

I mean, I will still read what is next!