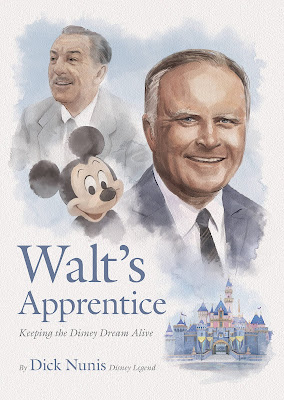 It is a harsh reality that Walt Disney passed away over 55 years ago. And sadly it means that many of Disney’s close colleagues and acquaintances have been taken from us. Dick Nunis represents one of those colleagues who worked with Disney over half a century ago, who we have heard others talk about but who had not yet captured his memories working at Disney until now.

Walt’s Apprentice: Keeping the Disney Dream Alive by Dick Nunis collects Nunis’ memories. Nunis outlines his youth including his college football career at the University of Southern California. After suffering a significant injury, Nunis moved into education, then training and development where Disney hired him as part of the Disneyland opening day training team. After a successful launch, Nunis found himself in operations where he oversaw lands within the park. His focus on capacity, efficiency, and maintaining Walt Disney’s standards led to his oversight of park operations. Working closely with Disney, Nunis would find himself added to projects as assigned. This would include participation in a World’s Fair, an Olympics, and eventually Disney’s move to the east coast with Walt Disney World. Nunis would successfully lead operations on both coasts until his retirement. Nunis then describes his post-Disney years as ones where he remained active and shared Walt Disney’s standards with others.

Nunis was assisted by a book team that created an outline for his recollections. Chapters tend to be topical and do not fully link to each other. The writing is clear, his team likely included editing skills, and he is easy to understand. Nunis has a reputation for being gruff. And his writing at times leans into this image with one section including phrases that support the story of the taskmaster general. The value is to see and hear these stories in Nunis’ voice. For example, he clearly was proud of his actions during the Yippie invasion of Disneyland. The text allows him to share his thoughts on this historical moment instead of letting others describe his actions for him. The pages allow him to tell the story in his voice and as he would shape it. The interesting piece to me however was how little was new. So many writers and colleagues have talked about the man that stories are not generally new information. Instead, they are about Nunis, by Nunis, and all of them are collected in one volume. Each chapter ends with a business lesson from Nunis, Disney, or other colleagues. I found these quotes somewhat unneeded as I read the volume less as a business book than a memoir. And some of these lessons seemed a little stretched to fit.

Walt’s Apprentice by Dick Nunis paints the former executive as a student of Walt Disney. And for some who see Disney as creative or affable may not take to the imagery. But we must also remember that Walt Disney was not a man who issued praise, worked hard, and demanded high standards. And while Disney may not have seen himself as a general like Nunis is willing to do, in many ways Nunis learned much from Disney. We must never forget that people are complex and do not always fit the stereotypes we place within our heads. The great benefit of Walt’s Apprentice is this book captures Nunis’ memories in Nunis’ words including his impressions of Walt Disney and himself.


This post contains affiliate links, which means that Between Disney receives a percentage of sales purchased through links on this site.
Posted by Between Disney at 1:31 PM