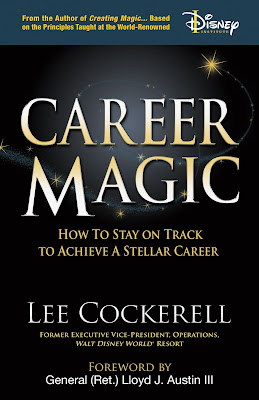 My career combines operations, customer service, leadership, and relationship building. And being a big Disney fan introduced me to former Disney executive Lee Cockerell. I have a fairly robust intellectual diet of the former Executive Vice-President of Operations, Walt Disney World Resort’s thoughts and best practices. Cockerell recently updated one of his books I had not read before, so I jumped on the pre-order as it suddenly seemed very relevant in today’s current job-seeking world.

Career Magic: How to Stay on Track To Achieve a Stellar Career by Lee Cockerell has recently been updated. Cockerell in podcasts and presentations has stated that he was dissatisfied with the editing of the first edition and that this revised edition cleans up editing errors. Career Magic narratively follows a life and career. Cockerell outlines his steps from a poor family in Oklahoma, a short stint in college, joining the Army, and then starting a hospitality career. Cockerell started at the lowest levels as a banquet server and leveraged his growing experiences into leadership positions at Hilton and Marriott. As an executive, Disney recruited Cockerell to join the Disneyland Paris opening team before he moved to Walt Disney World where he finished a career earning a window on Main Street. The book ends with Cockerell’s current retirement life as a consultant and speaker. In each chapter, Cockerell recounts his career story, connects his story to lessons he learned, and then finishes the chapter with summary statements of his career lessons.

Jobs and careers are a big topic right now. So let’s start with what this book is not. This is not a job-seeking how-to book. Anyone wanting hints and tips in getting hired by Disney or maximizing a job search will be disappointed. Cockerell does not share his ideas on using LinkedIn or his favorite resume format. So those seeking a resource on the nuts and bolts of their job search will not find tactics here.

Instead, this is a career book! Again, not tactics but really this is a book that highlights strategy. For me, I see two main themes; relationship and excellence. I really see relationship as being tied to leadership for Cockerell. He will remind his readers that he was rarely given leadership training as his career advanced. And so he often had to grow this area. As I read his journey, it seemed to me that as he grew as a manager and leader, this was really expressed in his relationships. You see Cockerell grow as a leader and executive in how he treated others. And Cockerell advocates for interactions that are respectful and emphatic. Basically, to grow a career, be nice! Second Cockerell’s journey and growth is tied to his continued excellence in assigned tasks. He took on positions that often pushed his current capabilities. He threw himself into understanding these jobs and then executing on expectations. This excellence often lead to him being noticed and advanced. And while he did have setbacks in his career, he still focused on the task at hand which allowed others to observe his execution and keep him in mind for future advancements.

Writing style, the text is very approachable and feels like Cockerell’s voice in text form. Cockerell is recounting his professional journey and the writing, and perhaps updated editing, provide an easy-to-follow story, even for those lacking a hospitality background. He also does a good job of providing easy-to-understand lessons that are directly tied to his career progress.

So many professionals in the current state of the world are reflecting on job seeking and careers. Career Magic provides professionals with many considerations while considering the next strategic steps and potential job changes. Those who are facing obstacles, perhaps they will find hope that relationship and excellence can create a career legacy of success. For those professionals who are also Disney fans, they will find two chapters on Disney parks operations that may spark additional interest. Lee Cockerell provides us with content to reflect on as we all look to create a career that satisfies and interests us.

Posted by Between Disney at 1:46 PM