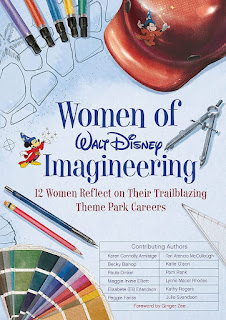 Women of Walt Disney Imagineering: 12 Women Reflect on Their Trailblazing Theme Park Careers presents essays from twelve different Imagineers who have combined decades of experience in numerous Imagineering trades. The collective authors are show designers, vice presidents, lighting designers, landscape architects, and more. Some of them are children of well-known Disney executives and legends. Oh…and they are all women! The group has an impressive portfolio, but their common thread is sharing their work experiences in an atmosphere and culture led and dominated by men.

Women of Walt Disney Imagineering is fairly straightforward. The twelve authors contribute a series of essays that discuss their times at Imagineering, as all of them have not left through job changes or retirements. Each essay is solely in the tone and experience of the author made up of Maggie Irvine Elliot, Kathy Rogers, Katie Olson, Julie Svendsen, Paula Dinkel Elisabete Minceff Erlandson, Tori Atencio McCullough, Pam Rank, Becky Bishop, Karen Connelly Armitage, Lyne Macer Rhodes, and Peggie Fariss. As a group, the essays are easy to read and relatively straightforward. Additionally, they do a great job of introducing readers to a number of Imagineering experiences including working one’s way up through the company and making a career, balancing home and professional life, and positive/negative treatments of women in the workplace.

There is a wide breadth of experiences in this book, more than one can express in one review. First and foremost, it was not always easy being a woman in the male-dominated WDI (Walt Disney Imagineering). There are examples of sexual harassment by unnamed male employees. But other forms of discrimination are discussed from being ignored to having male colleagues take credit for the authors’ work. For everyone, working at WDI may not have been as idyllic as many of us would hope. We should applaud Disney Editions for allowing less-than-flattering stories to hit the page. Though they at times make fans feel good as John Hench, Marty Sklar, and others show as positive professional mentors. Second, it is clear that at times female Imagineers had to suffer through perceptions in the office that made them come off as negative in the eyes of co-works, and sometimes that was what was needed to get the job done. And finally, there were often tough decisions that had to be made when balancing work and family.

Women of Walt Disney Imagineering: 12 Women Reflect on Their Trailblazing Theme Park Careers provides windows into 12 Imagineering careers. All of the authors have lessons to share from their journeys. And all were satisfied with their careers, as shown by their willingness to contribute to this volume. It is a very readable volume, which helps to demonstrate that Imanigeering is not just the domain of men.

Email ThisBlogThis!Share to TwitterShare to FacebookShare to Pinterest
Labels: Between Books, Imagineering