Between Books - Star Wars: The Princess and the Scoundrel 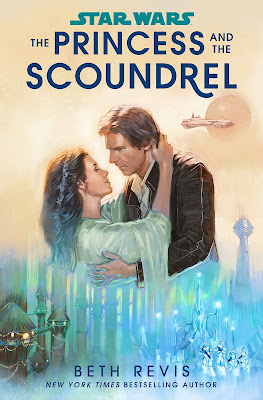 Some people love it, some people hate it, and Disney excels at it.

I needed to read Star Wars: Princess and the Scoundrel to better prepare myself for a future trip to somewhere I have never been, Disney’s Star Wars: Galaxy’s Edge, and the exclusive Star Wars: Galactic Starcruiser, the Haylcon, experience.

Readers are dropped into the days following the destruction of the second Death Star on Endor as Star Wars: The Princess and the Scoundrel by Beth Revis opens. Han Solo confesses his love and proposes to Rebel hero Princess Leia Organa. The Rebel Alliance puts on an Ewok Wedding, and the two plan to honeymoon. Despite the Rebel victory, the Empire still stands and is reorganizing. And while the newly married couple should take some time to honeymoon, they instead merge politics and love as they take a very public honeymoon on the recently recommissioned tourist starship, the Halcyon. The two struggle with defining what their new marriage looks like in a new universe where both will have plenty of responsibility and danger. Leia uses this trip to work in some ambassador work and the couple must show the galaxy that the Empire has truly fallen.

Star Wars books and I don't always get along. Mental images at times create frustration for me as the different species distract me as I try to remember what they all look like. However, here I did not have this concern. Instead, sadly, I just found this book a little dull. The plot was not quite galactic trade routes but it was close. Much of the book revolves around what the new galaxy can and will look like. So, lots of talky talky talky. The plot is a bit predictable with no action till nearly 70% into the book. I really preferred Revis’ Star Wars: Rebel Rising which better spaced the action. And let us be honest, Star Wars is an action story and we need a constant stream of incidents to keep the reader’s attention.

Synergy gives, and synergy takes away. Sadly, for me, Star Wars: The Princess and the Scoundrel fails to get Disney fans excited for a resort stay. And I think that those who want to visit Star Wars: Galaxy’s Edge should instead look to Star Wars: Black Spire which familiarizes readers with what they may see in the park…but not the Haylcon.

This post contains affiliate links, which means that Between Disney receives a percentage of sales purchased through links on this site.
Posted by Between Disney at 10:01 AM