Between Books - The Disney Revolt 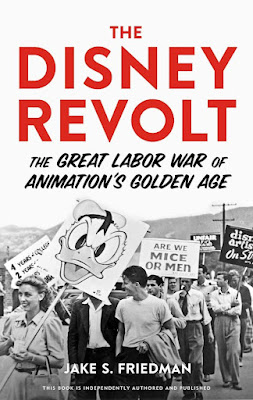 The Disney Revolt by Jake S Friedman could be my favorite new Disney book of 2022. It entertains, educates, and provides more depth into a turning point moment in Disney history. This book is a must-read for those who are Disney animation history enthusiasts.

The Disney Revolt: The Great Labor War of Animation’s Golden Age by Jake S, Friedman details the rise of Disney animation, the animation strike of 1941, and the long-term repercussions of this event. While at moments, it reminds me of a Parallel Lives of Plutarch formula, using Walt Disney and Art Babbit as the main entries into the story, it is really the insight into Babbit’s life that gave me the most interest as a reader. Friedman discusses the early life and career of Walt Disney to the founding of his animation studio and the release of animated shorts to features with Snow White. Disney evolves as a businessman with working-class roots who was close to his small yet growing staff and invested in their development with the creation of the in-studio art school as he attempted to maximize his artist’s efforts. As the business grew, the gap between labor and management also grew. This led to miscommunication and differing priorities over schedules, salaries, credit, and bonuses. Additionally, labor in Hollywood became increasingly organized, due to market and criminal forces, which meant eventually union influences would make their way to the studio. Disney and his leadership team attempted to shepherd and control, these influences in an attempt to keep the union voices pro-Disney, At the same time, the intelligent and outspoken Babbit worked to limit management control hoping that the voice of the worker would be truly heard. This eventually led Babbit to lead the 1941 lockout that would polarize employees and in some cases break relationships forever. Case in point, Babbit himself would virtually be exiled within the studio and later forced to leave with his art contributions largely ignored by the studio. Friedman presents us a history of Disney labor relations that is factual and highlights the faults of all involved in what was a painful and messy moment in Disney history.

While I at times saw similarities with the Parallel lives structure, it was really the Babbit content that stuck most with me. Friedman, in my mind, does not make him the hero of the book he provides a balanced view of Babbit’s life. I have found that other books will make mention of Babbit as only a victim, but Friedman introduces us to a man who was innovative and artistic and yet flawed. Babbit could carry grudges and act on perceived offenses that perhaps would be best ignored. He was passionate about things that he believed matter, and in this case, making sure that Disney employees were able to be heard on the union issue and not forced into a decision and organization that did not truly represent them. It is easy to see him standing on the picket line, yelling at his colleagues for breaking the line, and doing so with a tone that would forever break their friendships, until their elder years. Friedman shows us also an artist who was not perfect, at times needing to work outside of the Disney standard, and was innovative as he brought forth ideas like film reference.

The Disney Studio does not leave this account guilt-free. Walt and his leadership team were very invested, too invested, in creating a pro-management union at the studio. And many of their actions were underhanded and deceitful. It was not Babbit, but the studio, that interacted with gangsters in attempts to end the strike! Reading this account, one’s stomach gets squeamish as you read about Disney’s counsel Gunther Lessing and some of his actions at and before Disney. For strikers and management, everyone has a share of the blame for the moment that turned vicious and ended the family feeling at the studio.

The text is a solid work of history. It is extensively researched and notated. Additionally, it is well-written and engaging for a work that is primarily academic in tone. I enjoyed the use of pictures, which are sprinkled through the pages instead of condensed in one spot. They are put next to the most relevant moments and help to move the story along.

The Disney Revolt: The Great Labor War of Animation’s Golden Age by Jake S, Friedman is an engaging story of a key moment in Disney and animation history. Readers get to better know Art Babbit, both his strengths and weaknesses, and are reminded that Disney is a company that acts on business interests. If you told me that I would “enjoy” a labor history, I would have likely laughed. But seeing this moment through the eyes of Babbit and Disney created different views of this moment and likely a better understanding of this turning point!

Posted by Between Disney at 9:31 AM