Between Books - The Disney Animation Renaissance 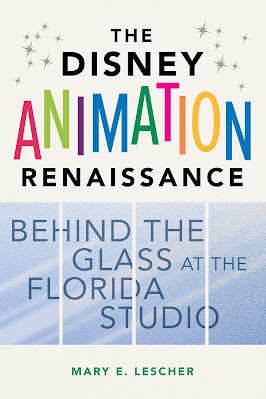 A monograph is a specialized non-fiction work usually focusing on one topic. Generally, they are scholarly researched, and validated works. When I was in grad school, monographs were used to provide specialized and detailed views of a topic. And my professors generally assigned trusted and highly academic works. I would argue that many of the books on the Between Books shelf are not monographs since they often lack extensive references, were published by non-academic presses that may have lacked scrutiny of the research or were written with publicity in mind. But as animated features become increasingly accepted as not just entertainment but also reflections of social and cultural trends, technological innovations, and art the door opens for more and more monographs to be added to books that Disney fans seek out.

The Disney Animation Renaissance: Behind the Glass at the Florida Studio by the late Mary E Lescher chronicles the development, rise, and closing of the combined Disney The Magic of Disney Animation attraction and Walt Disney Feature Animation Florida studio (the Florida studio). The studio and attraction co-existed from 1989 to 2004. The facility was originally designed for the Disney-MGM Studios theme park with a small animation team completing hand-drawn animation under the eyes of theme park guests. However, to Lescher’s readers, the story of the facility quickly changed as the tour educated guests on the traditional cell process but the animation team used techniques supported by computer workflows. While not truly equipped with Disney’s Computer Animation Production System (CAPS), Florida’s work was entered into CAPS production instead of following traditional hand-drawn animation. The Florida studio participated in the increased use of computer-supported animation as their hand-drawn images were scanned into CAPS in California.

The Florida studio were key contributors to Disney feature animation releases such as The Little Mermaid and Beauty and the Beast. The popularity of Disney animated films evolved the Florida Studio’s emphasis from education and park attraction to animation production. This would eventually lead to the massive growth of the studio and the assignment of feature films fully produced in Florida starting with 1998’s Mulan. However, this success was short-lived as technical innovations changed animation, new largely CGI studios entered the market, and corporate politics eventually lead to the closure of the Florida studio in 2004.

The Disney Animation Renaissance is written for an academic-minded audience. The text can easily be used in a college classroom, with clear and accessible writing. But also the text has numerous citations and references which provide the text academic authority. That being said, for Disney history fans the book is informative and likely to scratch the hobby itch. The warning I would give is this is not a relaxation text but a study text. I read the monograph with a highlighter, bringing myself back to my college days. Lescher provides no unneeded sentences and every sentence and paragraph is combined to chronicle a period in Disney animation history. Lescher’s conclusions are well-argued and ones that readers can easily find themselves agreeing with.

Lescher was well-placed to offer up this book. She held a PhD, was a researcher, and museum curator who had facilitated animation exhibits. Lescher maintains an academic tone throughout the majority of the book. But she does break free of that tone at times as she brings forth personal prior experience as a long-time staffer of the Florida studio. This tone swap helps her reader understand her passion and beloved memories of this experience. But it also explains how and why so many veterans of the Florida studio have emotional deep memories of their time there. This experience also provided Lescher the academic access to numerous other Florida studio staffers for oral history collection.

The Disney Animation Renaissance: Behind the Glass at the Florida Studio by Mary E Lescher is an academic monograph that is also accessible to Disney animation and parks fans. Lescher provides several important conclusions about the second Disney animation Renaissance, technology, the role of CAPS, and most of all the Florida studio’s contributions to the history of animation. Animation fans will lock onto the history of the films that the studio contributed to making. Parks fans cannot help but be fascinated by the evolution of the attraction and the perceptions of the animators behind the glass. And most of all, the work shows how serious academic studies on animation endeavors can provide us with valuable lessons about business, technology, innovation, and culture.

Review Copy Provided by The University of Illinois Press

Posted by Between Disney at 3:17 PM