Between Books - The Storm Over the Bay 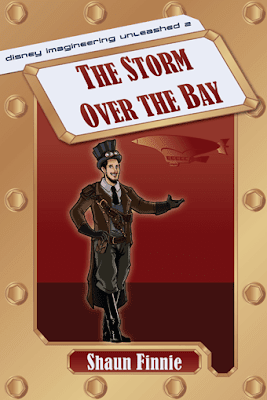 Shaun Finnie brings the futuristic Rothman family back in The Storm Over the Bay.  Have things settled down for the Rothmans.  Or will their lives be at jeopardy again in an effort to defend the Disney legacy?

A few years have passed since the Epcot Revolution, which has led to a more open Epcot.  But not everyone likes it.  Jack Rothman and his family have been labeled both heroes and villains by those living within Disney’s planned community.  But the Rothman’s prefer to stay out of the center of attention, with Jack largely rejecting his celebrity.  Sadly, something sinister still exists at Epcot.  Imagineers are dying.  The Rothman family relaxes at the new Discover Bay, but the new themed land may not be as safe as Disney is advertising.  And Jack Rothman is again caught up in a deadly struggle over Imagineering and the Disney legacy.  Can Jack and his son Heath survive the storm over Discovery Bay (yeah insert sad trombone here)?

I really liked Finnie’s first book in this series, The Happiest Workplace on Earth.  And I continue to enjoy this series in its second installment.  The Rothman family is very approachable to the typical reader.  Jack is a true unlikely hero, which is what most of us want in an action star.  And his motivations are generally simple; protect those he loves and innocents caught up in the action.  But for me the biggest delight was the growth of Heath Rothman.  It would have been easy to keep him stuck as a rebellious yet loving young adult.  Heath still has some edge to him.  But he has really grown into a strong young man with a job that he loves and a committed relationship which is encouraged by his parents.  This is really a Jack Rothman story, the first volume could be seen as a family tale.  Still Heath’s contributions and growth really excited me.  I would love to see what happens in the next volume, perhaps Heath becomes a young father.

I love the world that Finnie has produced.  I continue to enjoy the idea that Walt Disney was able to build a version of Epcot that was a working city.  And the city has changed.  Before Epcot was very regulated.  If you wanted to receive the benefits of Epcot you had to live in a very prescribed way.  Now while the Epcot Security Patrol are still very present, they now have to behave closer to humanity.  It is interesting to see how characters we have meet before react to the changes in Epcot.

The Storm Over the Bay is a really enjoyable action book.  It is set in a fictional future world that will seem very familiar to Disney fans with the book jumping into a new land and backstage areas we can imagine from our Disney research.  And I really liked that Finnie used as his centerpiece a Disney land that was once considered but never built.  But best of all is the characters that Finnie has dropped into the story, allowing us to relate to their adventures by creating a family we would all want to be friends with.

Posted by Between Disney at 6:33 AM