Between Books - From Jungle Cruise Skipper to Disney Legend 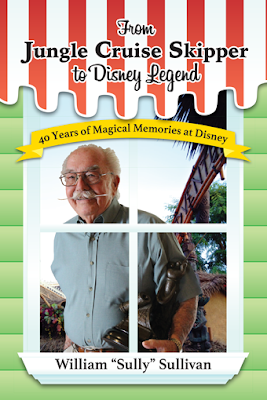 I am a really big fan of the World Famous Jungle Cruise!  In fact the other day I told someone I dressed up to hangout with them, I was wearing my Jungle Cruise shirt just for them.  Okay, it was mostly for me.  And reading Theme Park Press' latest offering with a Jungle Cruise theme was just as much for me as slipping on that comfy and stylish tee.

From Jungle Cruise Skipper to Disney Legend: 40 Years of Magical Memories at Disney by William "Sully" Sullivan at first glance appears to be an autobiography of a former skipper with memories going back to Disneyland's opening year.  But it is really much more.  It is a story of a young Skipper in Sully who left his job to try out this Disneyland thing he saw on television.  Sullivan started as a ticker taker at the Jungle Cruise and then began to work his way through a multifaceted Disney career.  Yes, he did move from ticket taker to Skipper, but that was just the beginning.  He would serve as a supervisor on Main Street USA, develop security plans for the 1960 Winter Olympics, helped run operations at the 1964 New York World's Fair (though he never met Mary Blair) and other tasks as assigned by the Boss himself Walt Disney.  Eventually, Sullivan would leave California and join the Florida team joining the development of Epcot and eventually becoming the Vice President of the Magic Kingdom, having again started as a ticket taker.  The book alternates between chapters written by Jim Korkis that provide context to Sullivan's experiences and those with Sullivan speaking about his life.

I have often called General Douglas MacArthur the soldier of the 20th Century.  He was born in a Western outpost when horses were still standard equipment, fought through 2 global conflicts and ended his career with an arsenal that included the atomic bomb.  Ironically this is how I feel about Sullivan!  He was the employee of the first 40 years of Disney parks operations.  He started as part of the ticket book system, followed Walt Disney as he expanded his entertainment pursuits, and ended with one price ticketing.  Sullivan's career does more than define him as a person, but describes the history of Disney Parks as one observes him.  The reader discovers quickly that Sullivan is a man who said yes when asked to do things outside of his expertise.  And this tendency served him well as he went from assignment to assignment.  All of these experiences made him a well-rounded executive who was focused on the the consistency of guest service across his areas of responsibility and those who worked for him.

With Jungle Cruise in the title, one does want the book to be funny.  Honestly, there are no rolling around on the ground belly laughs.  Though you will likely crack several smiles.  Readers will learn a lot about Disney history, even if they are experienced Disney historians.  I now know about orange ties and baby alligators in the early days of Disneyland thanks to Sully.  Sullivan started in the Jungle Cruise and though he did not stay for long his recollections are filled with the fun of what he was doing.  He liked working for Disney and enjoyed having a good time.  And why would he not have enjoyed working for the Boss.  His employment in the parks would lead him to meet his wife and enjoy what honestly reads as a highly satisfying professional career.  And he will always be a skipper!

Really, if I wanted to use a word for From Jungle Cruise Skipper to Disney Legend it would be charming.  One cannot be caught on Sullivan's words as he discusses Walt Disney and the need to train staff to treat guests the Disney way.  It is full of admiration and care.  Sullivan's admiration becomes infectious very quickly.

Sure, the Jungle Cruise is what gets you in the door as you pick up From Jungle Cruise Skipper to Disney Legend: 40 Years of Magical Memories at Disney by William "Sully" Sullivan.  But gets you to stay is the historical evolution of 40 years of Disney parks.  For those years when a major advancement in the history of the parks occurred, Sullivan was generally there with his can-do attitude and commitment to Disney quality.  And as a reader you will feel overjoyed to spend some time immersed in Sullivan's world.