Between Books - It's a Crazy Business 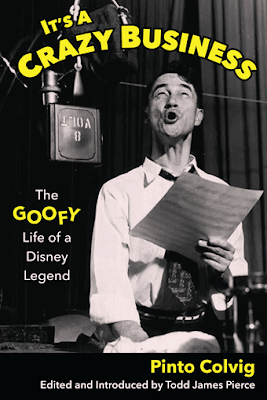 It's a Crazy Business: The Goofy Life of a Disney Legend by Pinto Colvig and edited by Todd James Pierce recalls memories of the Disney studio from over 70 years ago.  Colvig, a Disney Legend perhaps not familiar to many of us, worked as a story artist along with being the voice of Pluto.  Colvig in fact made a career for himself as a sound man, voicing not just Pluto but providing a variety of sound effects on radio and theatrical releases.

Colvig's memoir written in the 1940s recalls a number of Disney and non-Disney events.  He discusses how he came to Hollywood after being a second, or third rate, member of a traveling band.  Colvig actually started as an animator, experimenting with his craft in live-action and even running his own studio briefly.  And he details how he discovered some of the sounds he used in productions and how they were delivered in radio.  Colvig examines the Disney operation from his days including discussions of Disney story meetings and the voice actors that he worked with at the studio.  He finishes with a very personal look into his life, a nervous breakdown that he suffered while working on Snow White and the Seven Dwarfs, providing the voices of Grumpy, Sleepy and more.  His description of the incident includes him acting out in the office and follows with a detailed discussion of his days in a sanitarium.

It's a Crazy Business feels very homespun.  Colvig's style is to write to the reader as if a conversation is occurring.  So one feels like you are sitting at times in an intimate room as he tells you about that one time, or let me tell you about this gal I worked with.  It is intimate, friendly, honest and folksy.  And when we say honest, this includes his experiences with visions while coalescing in the sanitarium.  He really pulls nothing back as he tells his story.  It is quirky and funny.  His closing chapters do demonstrate how stressful it was for even animation veterans when making Disney's first feature length cartoon.  Additionally, Colvig does give one a flavor of the Disney studio during the 1930s including the people who worked with him.

It's a Crazy Business introduces Disney fans to Pinto Colvig, a legend that you likely you did not know beyond trivia.  Nobility and statesman visited the Disney studio just to hear him bark, as Pluto.  And some hoped to be like him, making noises with his half of a trombone.  But in the end Colvig proves himself to be an original that others cannot copy with both his personality and ingenuity.

Posted by Between Disney at 6:38 AM