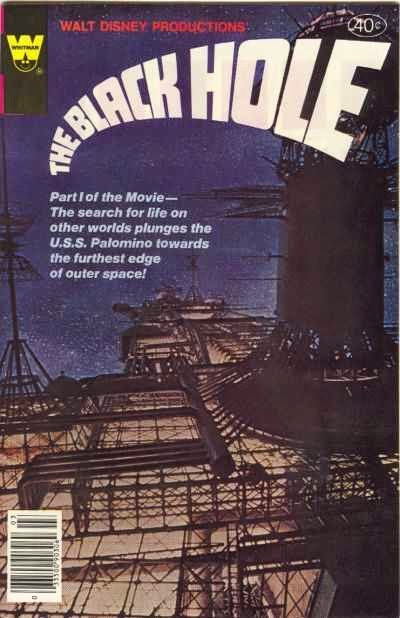 There is part of me that really wishes there was more The Black Hole content out there.  I get excited with rumors about reboots and I really hope that it will happen. In my quest for new related content a friend grabbed me a few comics for me to enjoy that were new to me.

So time travelers set coordinates for January 24, 1980, to pick up the March 1980 cover dated Walt Disney The Black Hole #1.

The USS Palomino searches for life in uncharted space.  While the crew fails to find life, they do find a Black Hole.  The crew is shocked to discover the lost USS Cygnus stationary near the cosmic phenomenon.  The crew board the Cygnus and find that only the leader of the Cygnus' expedition Dr. Hans Reinhardt survives.  The ship is staffed by lifeless androids.  While finding the lost scientist should be a moment of celebration, the crew discover some strange activities upon the vessel including a robot with a limp and a robot funeral.  The story ends with the elderly robot B.O.B. confessing a startling secret to his new friend the robot V.I.N.CENT from the Palomino.

The story is pretty close to the live-action movie.  And I enjoyed seeing this half of the movie in a new medium.  But, Disney and Whitman must not have been able to get rights to the actor's likenesses.  I thought this might be true when I first saw reporter Harry Booth played by Ernest Borgnine.  The likeness seemed a little off.  But then when we meet Dr. Alex Durant it becomes clear that they really must not have had the rights.  The role was portrayed in the movie by Anthony Perkins.  The comic represents Durant as a curly-haired, mustached, glasses wearing scientist.  Perkins was straight-haired, clean-shaven, and glasses free.  The comic representation honestly looks nothing like Perkins.

It was difficult to uncover who wrote this comic.  But Amazon shows the author as Mary Carey.  I know nothing about Carey, but it becomes clear that she worked with Disney on numerous writing projects.  These works include children's adaptations of Peter Pan, longer prose in text versions of Mary Poppins and even some Duck books.  Basically, while Carey may not have written many comics she did have a lengthy writing relationship with Disney.  The art is by Dan Spiegle, who has illustrated several western, adventure and classics comics.  While the team may not have been marque names, it was one that paired two professionals.  And the adaptation works as a comic.

One of the most interesting things for me about the comic is the publisher.  The title is published under Whitman.  However, the parent company was Western Printing and Lithography Co..  Western had invested $200,000 into a little project of Walt Disney's called Disneyland and owned 13.8 percent  of the park on opening day.  Now, by January 1980, Disney had long bought out Western.  But they still had a healthy business relationship including licensed comics.

I liked Walt Disney The Black Hole #1, if just for the nostalgia factor.  I find msyelf excited about finishing this story.  But I am even more excited about finding out what happens after the adaptation ends!
Posted by Between Disney at 12:00 PM