Between Books - Captain America: The First Avenger - The Screenplay 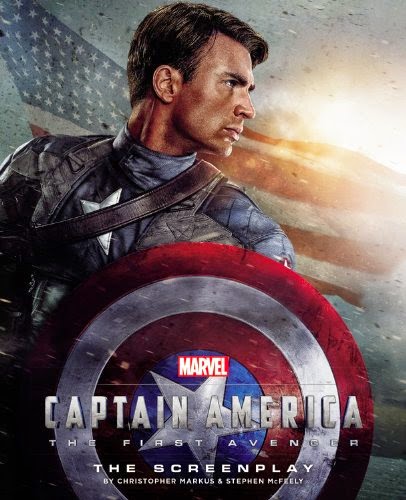 When searching the library for something else I stumbled on Captain America: The First Avenger - The Screenplay by Christopher Markus and Stephen McFeely.  And being a guy who loves the Marvel Cinematic Universe (MCU), I had to grab this Between Book!

Captain America: The First Avenger - The Screenplay puts the movie's official screenplay in the reader's hands.  The text is a shot for shot script of the movie, complete with traditional screenplay notations.  The story is familiar to anyone who has seen the film, the saga of how Steve Rogers was transformed into Captain America who leads the fight against evil Hydra during World War II.  Along with the script, readers are given storyboards for the "Kruger Chase Scene".

It is quite an adventure reading a screenplay.  There are a number of notations I had to research such as why were scenes omitted, they were once in drafts of the script but are now removed though a placeholder shows their past existence.  And O.S. meant nothing to me until I through Google learned it was "Off-Screen".  As you can see it is a very different reading experience.  I am very familiar with this story.  So sometimes the lines are not the same as I remember them.  I assume that that in these cases an alternative line was edited into the film that was not included in the script.  I will not say I liked this experience better or worse than reading a typical book, but it is definitely different.

I really read the book to get greater insight into the movie.  One such insight is I have always called Dum Dum Dugan, Gabe Jones, Bucky and Captain America's other elite fighters the Howling Commandos due to press pieces.  The Howling Commandos traditionally include Dugan and Jones, but in comics are actually related to Nick Fury.  The script never calls them the Howling Commandos, instead they are referred to throughout the screenplay as the Invaders.  The Invaders in comics was Captain America's World War II team that included Bucky but also superheroes such as Namor and the Human Torch.  And I can see how in the script stage that the Invaders would have been a more natural name than Howling Commandos.  Another moment that worked better for me in print is the final crash scene.  There is a moment where you want to say that Rogers did not try very hard.  But the screenplay really does a good job breaking down the options for me.

Another aspect that I found illuminated was how bare a script for a major action movie can be.  The scenes I know are all here.  But background and action sequences are rarely broken into deep detail.  I can now see how important the work of the production staff really is because there is clearly a large amount of conceptual and design work behind the script to make the image a eye popping action romp.

Captain America: The First Avenger - The Screenplay retells a story that many of us know and enjoy.  The screenplay mostly follows the movie that we know.  But it does help fill in some details.  And it leaves some questions, like what cities were omitted from the war bond tour?  Did Cap come to my town?  I totally want to know!
Posted by Between Disney at 6:06 AM