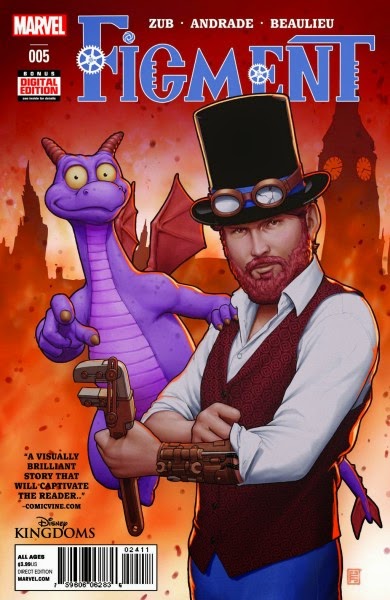 I can truly say that Figment #5's last page is one that delights.  As I read it to the Between Kids, because they fought about who got to experience it first and so a family read was the only way to break the tie, a large whoop of excitement rang out as we flipped to the last brilliant full page panel  with art by Filipe Andrade and colors by Jean-Francois Beaulieu.  It is a true payoff to the entire Disney Kingdom's comic series, one that will tickle even the non-comic Disney fan!

Jim Zub completes his origin of Dreamfinder and Figment in 'Journey Into Imagination Part Five."  Blarion and Figment return to London with Chimera and Fye in tow.  But London is now falling under the control of the orderly Clockwork Control and its robotic leader the Singular.  A physically, intellectually and spiritually changed Blarion has become someone new.  He is the Dreamfinder.  Dreamfinder uses his control of Dreams and his newly created Dream Machine to fight Clockwork Control for London, or Lon-don.  The cost of battling Clockwork Control in the end could be a high one, one that could lead some of our heroes starting a new journey.

Figment has been wonderful.  And I say that as a guy who does not obsess about Figment and Dreamfinder.  The Between Tween has fond memories of Figment from our last trip to Walt Disney World...over 5 years ago!  And for the Tween it has been nostalgia (yes I am aware some of you are shocked by this).  But for the Between Kid it has been an first introduction to Figment, which might lead to the question of where's Dreamfinder in the future?  And it is Dreamfinder that we get in this final issue, complete with the traditional model we would expect.  I am guessing that both will be tickled in the future when they find the Dream Machine hidden in Epcot!  Zub and his team have introduced a whole new batch of fans to this classic Disney characters.

As an adult Disney fan I find myself now placing Figment higher on my like list.  But that is an emotional response.  You see, I was able to share a comic book with my kids.  We all talked about the story.  I got to read it with them.  And I loved the excitement when I would come home with the newest issue.  This is a major win for a comic fan dad.  The fighting was appropriate.  The costumes were not skin-tight.  I got to share with my kids the fun.  And is not something that would have made Walt Disney happy?

At this time Disney Kingdoms has not announced the next journey.  I will say I think Zub and Andrade should be approached about another chapter!  Dreams are big and as endless as imagination.  And I feel there is more story to tell.  The Between Kids want more story.  And I want to share more with them.

Figment has been a major success in Betweenland.  I have discussed comics with Disney fans who do not read comics.  I got myself a pull list!  And I am just one of a few that would love to see and read more!
Posted by Between Disney at 6:31 AM