Between Books - Death in the Tragic Kingdom 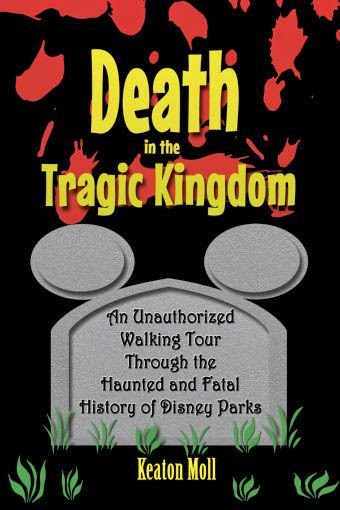 This morning I was overloaded as I commuted to work. I had my book bag, my lunch, and a really heavy bag of stuff for a presentation. The big bag was making me a little wobbly. So as I walked up to a train platform and found myself walking into the yellow warning area closest to the tracks, I wanted to yell, “come on people, I don’t want to have an accident here.” You see I am at the moment a little hyper-aware of what a simple little fall can do after reading Death in the Tragic Kingdom.

Death in the Tragic Kingdom: The Unauthorized Walking Tour Through the Haunted and Fatal History of Disney Parks by Keaton Moll walks readers through the unfortunate early deaths of cast members and guests in Disney theme parks and the cruise line. The majority of cases consist of a short paragraph. Where newspaper articles and court documents exist, the descriptions of the events are longer. Moll takes his readers through these incidents like a tour guide, walking us through Disney property as we move from death to death. Along with accounts of death, Moll provides information about the urban legends of Disney hauntings. The book ends with a series of maps where one could follow the events of the book as a walking tour.

Moll’s tone is non-judgmental. He explains how deaths occur but generally does not pass judgment. He makes sure to explain that deaths at Disney are inevitable. The parks are cities! Just due to numbers of cast members and visitors, accidents and natural causes will lead to unexpected deaths. He does note some bad maintenance practices that have attributed to deaths in the past. But generally he assumes good will on Disney’s behalf. There are a few typos, but the do not interfere greatly with the experience. My only real complaint about Moll’s writing is that transitions for me are not always clear, but that could be an issue of spacing.

I do not like scary. When it comes to ghost stories, he passes the story along but makes it clear with some stories that he has trouble believing them. Moll makes it clear many of the ghost stories he shares are of a likely fictional nature, though he does share his own creep out moment. But I will say as I read this book I could feel goose bumps on the back of my neck. Honestly, I love these places he discusses. And the idea of any of these locations being haunted creeps me out a bit. But there are plenty of people who like a good scare!

Here is what I have learned from Moll. And honestly these are probably lessons Disney would like us to take note of. Though this is the type of book they would never endorse. Do not get out of your ride vehicle unless a cast member authorizes it. If Disney puts up a sign that states do not enter, don’t! And slipping and falling creates unsafe situations everywhere. Sadly another lesson is that some people chose the happiest place on Earth for their final resting place.

Death in the Tragic Kingdom outlines a piece of Disney history we rarely discuss, death. Keaton Moll provides us locations and stories on how these often sad events occurred. Additionally, he shares Disney’s ghost stories. For me, the last few days I have been careful of where my feet have been taking me. If a surface looks slick, I am going to step carefully. And as I walk with my headphones blaring a Disney podcasts in my ears I am paying more attention to traffic. Because if an accident can take me in my favorite parks, it could easily happen on my commute!

Review Copy Provided by Theme Park Press
Posted by Between Disney at 6:17 AM