Between Books - The Unauthorized Story of Walt Disney's Haunted Mansion 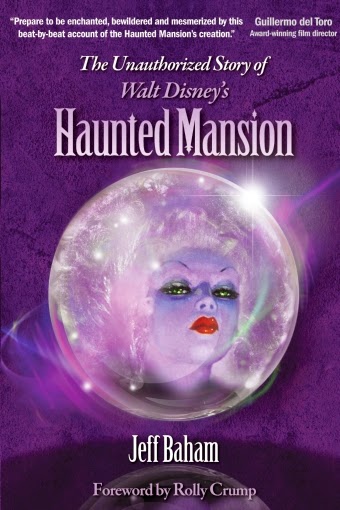 When I was in college one particular professor was my role model.  He was knowledgeable, but also allowed himself to have some fun. He could communicate clearly with little confusion.  He spoke about facts and let rumors and off-hand stories be heard but clearly noted for what they were.  I think this is why I have come to respect Jeff Baham for his work on the Haunted Mansion.  He knows the gossip around the attraction, but he also labels it for what it is.  And his own quest to find more truth about the Mansion has helped uncover lost history behind the famous Walt Disney attraction.  And these new truths are one he has been able to communicate in an easy to understand manner.

The Unauthorized Story of Walt Disney's Haunted Mansion by Jeff Baham is a comprehensive history of the world famous Haunted Mansion.  Baham starts his tale decades before ground was broken in Disneyland, discussing the haunted houses and theme parks that Walt Disney would have been exposed to especially in Kansas City.  The story heats up in the 1950s as Walt Disney builds his first theme park and plans for a Ghost House within his new adventure.  Baham next outlines the evolution of the concept as the Ghost House was transformed from a walking attraction to the Omnimover driven dark ride we have today.  In describing the concept evolution he details the roles of Imagineers such as Ken Anderson, Rolly Crump, Yale Gracey, Mark Davis, Claude Coats and X. Atencio including their disagreements and rivalries.  Much of the inside story follows Crump's tale, with the Imagineer also writing the Foreword.  After developing the ride, Baham takes his readers for a tour through the Haunted Mansion discussing history and variances between different versions.  And finally he provide an Appendix focused on Haunted Mansion themed merchandise.

I am going to sneak in my two nit picky issues while also pointing out how much I like this title.  First, I really wish that an index was included.  Luckily, this is a short book under 150 pages so it is easy to scan through.  But it is both well-written and filled with excellent history of the Haunted Mansion.  In fact, as Haunted Mansion history evolves it is likely the most complete to date with the inclusion of the Sauer "Castle" and discussions of the homes that inspired the facades of both American Haunted Mansions.  But an index would be such a nice tool for younger researchers who might want to dig into the design story of the attraction.  Second, I wish there was a conclusion from Baham about his thoughts on Haunted Mansion history.  The text as is feels like it abruptly stops with the attraction walk through and then merchandise.  I think it is fair to say that Baham knows more than the typical Disney fan about the Haunted Mansion.  And this deep knowledge and understanding comes out in his very easy to read informative text.  But I would have loved to see his reflections on either the Haunted Mansion or his own personal quest to fully document the Mansion in great detail.  Yes, it may not have added to the facts.  But I feel it would have been a more than fair addition, especially since my experiences listening to his Mousetaliga podcast have shown him to have great insight into Disney history.

Let us be honest, I complain only because I enjoyed this book so much.  And these are really minor quibbles.

Then there is the ghost in the room, what if you bought Baham's first Haunted Mansion book, An Unofficial History of Disney's Haunted Mansion?  Do you buy the second one?  Baham in interviews makes it clear there is new material and reorganized material.  There are at least 20 additional pages in the newer book.  And it seems to me that there are less images in the updated book, which means there is even more text.  Additionally the new book's page size is around half an inch bigger.  All of this means again more content!  And the content includes greater discussion of Walt Disney and the people who made the attraction.  Another difference is images.  The pictures found in the updated history are sharper and clearer.  If you are considering purchasing between the new history and the older Baham history I would select the newer one just due to the influx of new content.  And if you have the old Baham book, buy the new one too because you are clearly a big Haunted Mansion fan!

When I heard that Jaff Baham was going to be working with a publisher to offer a new updated Haunted Mansion history, I got excited.  Since I heard it mentioned on his podcasts, I have kept this book on my radar despite having reader the earlier book.  The Unauthorized Story of Walt Disney's Haunted Mansion is a must have for Disney book fans, Haunted Mansion fans and parks fans.  It is well written, well produced and filled with fact about one of the most storied Disney attractions of all time.  It is clear for Baham that the Haunted Mansion is a passion.  We are just lucky he is willing to share the vast history he has uncovered.

Posted by Between Disney at 5:50 AM