Between Books – They Drew as Pleased: The Hidden Art of Disney’s Golden Age The 1930s 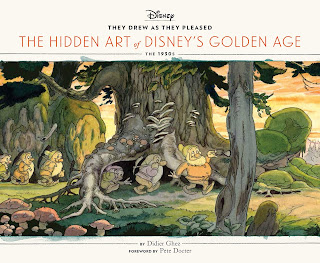 I had heard a lot of good things about Didier Ghez’s They Drew as They Pleased series. But I had not pulled the trigger on a copy of this art series due to price and time. But recently the Between Wife purchased me a copy as gift. And if anything has given me joy during this pandemic it appears to be art books.

They Drew as Pleased: The Hidden Art of Disney’s Golden Age The 1930s by Ghez introduces readers to four important early Disney story artists. These artists in the Story Department did not animate or put Disney characters directly on cells. Instead they were the artists that modeled the tone, mood, models and even worked out scenes in their early stages before animators were asked to create the story. They were the draftsmen and draftswomen that created the look and story which then would be turned over to the army of animators, inkers, inbetweeners and other artists who worked directly on screen. The book is fairly simple with four main chapters crafted around one artist from the 1930s. Ghez introduces his readers to the four artists; Albert Hurter, Ferdinand Horvath, Gustaf Tenggren and Bianca Majolie including their educations, pre-Disney careers, Disney highlights and then post-Disney lives. The biographies which run around 10 pages each are then followed by pages and pages of concept art that the artist provided Disney including projects which became films and shorts along with those which were never realized.

Let me be honest, the art is gorgeous. It is presented well and allows one to dive into these story creations. And with the art being the bulk of the pages, it should be and Chronicle Books succeeds. The biography to me were fairly interesting as they showed me some trends among the artists I was not fully familiar with. First, many early Disney artists had European roots and sensibilities, which then had a large impact on his early fairy tale films. Also, while we may thing of animators who stayed on for years, the early story artists appear to have had relativity short careers at the studio. Additionally, I really enjoyed reading about Majolie who had ties to young Walt in Chicago and how she was able to grow into the story artist role as a woman in a very male dominated department.

They Drew as Pleased: The Hidden Art of Disney’s Golden Age The 1930s is likely a must for Disney art history fans. The pages are pleasing, but I personally could use a few additional context captions being more word based. And I have read, even written, history in this short biography format. But some may balk at a $30 price tag for this style of book. For one, I really like it as an addition to the Between Books shelf and will likely add more in the future.

Posted by Between Disney at 2:02 PM