Between Books – The Disney Monorail: Imagineering a Highway in the Sky 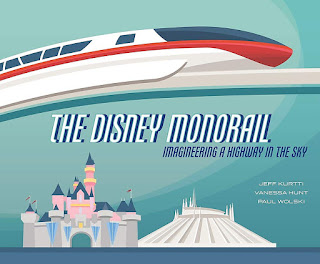 The monorail is truly an iconic symbol for Disney parks.  Since this transportation option has not taken off globally, for most of us we only get to access this unique vehicle at a Disney park and when we run into one in the wild we naturally begin to think of times at Disney.  So it only makes sense for Disney to offer a mostly comprehensive history of Disney monorails.

The Disney Monorail: Imagineering a Highway in the Sky by Jeff Kurtti, Vanessa Hunt and Paul Wolski provides Disney fans a detailed monorail history.  The authors open the book with a look at early monorails in the 19th century including the wide variety of construction options for these vehicles.  They follow discussing Walt Disney’s history with innovation and monorails culminating with his decision to build an Alweg style monorail in Disneyland.  This discussion includes studying the use of trains and pseudo monorails like the Viewliner at Disneyland.  The book discusses the growth of the monorails into other Disney global parks such as Walt Disney World and the Toyoko Disney Resort.   And the authors spend time exploring Disney monorail culture with merchandise and monorail themed non-monorail attractions.  The book ends with a listing of monorails out of the parks and Between Disney.  The book is illustrated throughout with Disney concept art and photos.

First and foremost, this is a beautiful book.  You likely cannot find one volume filled with so many wonderfully illustrated concept paintings and sketches from artists like Herb Ryman that have been terrifically framed and displayed on the page.  It is visual candy to the Disney fan.  Second, the book is a largely comprehensive history of Disney monorails.  It really felt as if very generation and major event of monorail history was outlined…but one.  The 2009 tragic collision with Monorail Blue and Monorail Pink at Walt Disney World is ignored.  Charts in the book mention these two monorails and their retirement but not why.  I really feel this is a missing event that should have been noted especially since the book talks about safety.  Since the young cast member pilot who passed away was a acknowledged monorail fan, a dedication would have seemed appropriate.  I wonder if this text had been published by someone other than Disney Editions if it would have included this sad incident?  But then the authors would have likely lost access to the rich art and images found throughout the book.  It is a balance, but it feels a little more like a promotional piece than a history due to this missing historical moment.  Even with this absence, the history really does a nice job of drawing out the evolution of monorails.  Readers will be left with an understanding of different styles and their usefulness over shorter distances and in industrial settings.

In the end, The Disney Monorail is a beautiful book that most Disney parks fans will want in their Between Books library.  The images are just incredibly striking and one can get lost in them especially during a time when so many of us have between visits.  And the text provides a nearly complete and interesting discussion of Disney monorails.  I can think of many other Disney attractions that I would have to see Kurtti, Hunt, Wolski complete a similar treatment of which would delight parks fans.

Posted by Between Disney at 1:01 PM