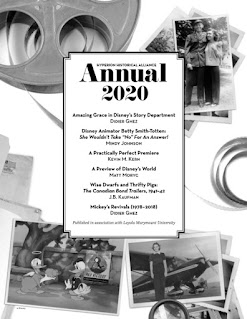 As someone who has a history degree and been part of history associations, I have some pretty high standards for what content should be from these professional groups.  Then tie in Disney and the contributors who are participating in the Hyperion Historical Alliance, well a fairly high bar is set.  With the “2019Hyperion Historical Alliance Annual”, I found a concern or two.  Would the Alliance’s second annual correct the concerns I had?

In his introduction, Hyperion Historical Alliance President Didier Ghez notes that the first Annual appeared to really focus on production and artists.  And for this volume they attempted to provide a wider array of topics.  I am not sure that they fully hit with this stated goal as five of the six essays are really based on filmed productions and only one theme park based article.  However, I never really noticed the focus on production.  Instead I found myself caught up on an unintentional theme, Disney female pioneers.  Of the six articles, three have a focus on female contributions in Disney history and unearthed to me some unknown interesting Disney figures.  And Ghez’ article on Mickey Mouse productions also adds additional female contributions.  And on a whole I found these articles interesting and engaging.

The “2020 Hyperion Historical Alliance Annual” consists of six articles.  The first two highlight the contributions of two female creators in the 1930s and 1940s giving an overview of the careers of Betty Smith-Totten and Grace Huntington.  Both articles make it clear these women were trailblazers in numerous areas of their lives and the impact of women at Disney.  “A Preview of Disney’s World” chronicles the Walt Disney World Preview Center, with a focus on staffing and the Center’s impact on promoting the future theme park.  “Wise Dwarfs and Thrifty Pigs” outlines the use of Disney animation to promote Canadian War Bonds during World War II, which really shows the innovative ways Disney reused animation for new purposes.  And finally, “Mickey’s Revivals” discusses the attempts to get Mickey back on the big screen from the 1970s to the recent past.

One of my complaints of the earlier volume was adapted work that I had seen elsewhere and in multiple forms.  To me these articles were all fresh and new research.  The one that likely worked the least for me was the Mickey article, as it felt like it was the one which could have been written without special access to unpublished documents or interviews.  And it just reminded me that I wish the Hyperion Historical Alliance was less exclusive and a path for those who are interested in Disney history to have more active participation.

And I can guarantee, I will purchase next year’s annual especially after the quality of the articles in the 2020 edition.

Posted by Between Disney at 8:57 AM