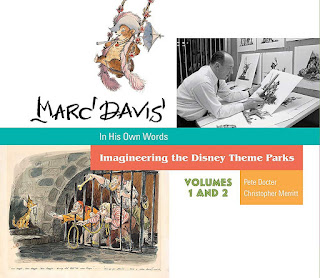 Marc Davis In His Own Words: Imagineering the Disney Theme Parks by Pete Docter and Christopher Merritt is much more than a simple book.  The title is truly an experience, one which can help enlighten and raise the spirits of a Disney fan…because in 2020 more of us are Between Disney than ever before.

During the health crisis of 2020, I took eight months to read this two-volume text.  And when I say read, I mean experienced.  For me, every session was carefully staged in strong lighting.  I played appropriate attraction or movie themes on a speaker.  I never ever read so long that my mind began to wander.  I truly just let the book pull me into the art, process, and finally the experience of many of Mark Davis’ masterpieces.

The structure of Marc Davis In His Own Words is largely what one would expect.  The 749 pages open with a chapter about Davis’ career in animation, a career which on its own merit was a triumph.  The book then follows his path through Imagineering, being called over by Walt Disney to provide creative ideas at Disneyland for “Nature’s Wonderland” and other established attractions.  Then the authors bring us through Davis’ most celebrated attractions including “Pirates of the Caribbean”, “Haunted Mansion”, “Country Bear Jamboree” and more including the transfer of many of these ideas to Florida and the Magic Kingdom Park.  The book ends with a period of creative frustration for Davis as many of his ideas were never fulfilled including the “Enchanted Snow Palace.”  Finally, a retired Davis continues to provide support of Imagineering creative endeavors, consulting with EPCOT and Tokyo Disneyland.  The chapters are picture heavy, with really the Davis art at the center of attention.  Davis quotes surround his striking art along with the words of his colleagues.  There is some background information provided by the authors, but they admittedly take third place to the art and words of Davis and those who worked closely with him.

I have many thoughts, and learned so much during the months of reading this book that everyone praises.  First, I feel like I can now say I have experienced new Davis’ attractions such as the “Enchanted Snow Palace” as the excellent presentation of his art allowed me to sit Between Disney and experience a ride that has never been realized, and perhaps it should be!  But even for the attractions I know deeply, I can see them in a new way as Davis’ art provides never included details, variations and insights that I had never considered.  I also believe I know Davis the artist better.  His attraction development includes numerous brainstorming ideas which he drew out so he could find the right idea.  We have often discussed as fans that Walt Disney noted you cannot choose from one.  This maxim is true for Davis and his own efforts to find the story as he sought multiple ideas in his storytelling.  The best part is this is not told to us but shown to us through his concept art.  Additionally, he did not see an attraction as true pure storytelling.  An attraction was an experience and he could immerse guests into it.  But the story would be different for everyone.  And so Davis was not truly looking to tell stories but instead experiences.

If you are interested in Disney books, you have likely heard how great Marc Davis In His Own Words is.  They are right.  The two-volume book can be seen as a major investment, but the title can at times be found on sale which makes the price more reasonable for two large art of books.  But in the end, for me the price was fair.  Because I was able to use my time largely at home to bury myself multiple mornings into Davis’ fantastic worlds.

Posted by Between Disney at 5:45 PM