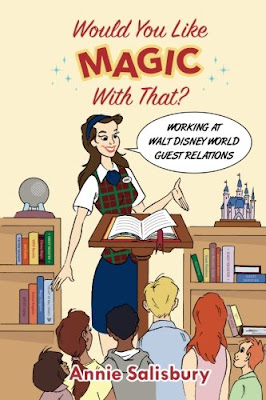 I was a big fan of The Ride Delegate.  So seeing a second Annie Salisbury memoir got me super interested.  Her first book took us to places that the regular people like me cannot consider.  And I hoped this second book focusing on her time as a Plaid in Guest Relations would provide more fun and unique stories.

Would You Like Magic with That?: Working at Walt Disney World Guest Relations by Annie Salisbury starts in a sad place.  Salisbury begins this memoir with her first Disney casting, working DisneyQuest, a site she never wanted and attempted to escape.  Surviving the College Program, Salisbury continued on and was able to briefly move over to the Great Movie Ride.  From this position she was able to use the Disney casting system to get moved to Guest Relations at the Magic Kingdom.  But instead of being posted as a Plaid, she instead was tasked as a Celebrate Greeter, spreading magic in the park for guests without actually being trained into Guest Relations or wearing the famous uniform.  After bartering her way into actual training, Salisbury recounts stories that let her readers understand the roles and politics of Guest Relations, including the threat for many that this casting is temporary and something they could lose forever.

Salisbury helps illustrate several points.  First, College Program members you get what you get.  And Disney may lie to give you hope of other castings.  But really, if one is dissatisfied with what Disney has chosen for them the only real escape option is to leave.  Salisbury also does a nice job of explaining how non College Program cast members can switch positions at Walt Disney World and the extreme efforts and risks one may have to take to move into a desired role.  And most of all, she provides clarify like all offices, Guest Relations has politics and maybe even people meaner than those you work with on a daily basis.

I have quoted Would You Like Magic with That? a few times.  I am currently training staff who help resolve situations.  And I have used the concept of "appropriate" and "obtainable", which Salisbury learned at Guest Relations as a good ruler for for strong problem resolutions.  If something does not meet both of these conditions, in all of our customer relations we should review if it is the solution we select.

I liked Would You Like Magic with That? but still find The Ride Delegate to be my favorite of Salisbury's memoirs.  But this time she did not have the chance to surprise me with the strength of her stories.  But I can now proudly ride the Great Movie Ride knowing that Gangsters are jerks.  And I now know just how bad a situation it takes to get Disney to consider free admission, there will probably be tears.  Because sometimes has to ask Would You Like Magic with That? when circumstances make the day less magical for both cast and guests...even at Walt Disney World!

Posted by Between Disney at 6:20 AM