Between Books - 40 Year in a Mousetrap 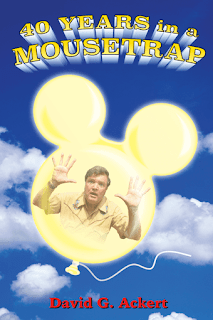 Recently I have been reading a lot of memoirs from those who served for a few years as young adults as Disney cast members.  But some cast members work for years and make Disney a career.  David G. Ackert shares his fun experiences working the Disney front line for decades.  How would his experiences vary from those who worked for a year or less in the park?

In March 1975, young David Ackert was hired on at Walt Disney World.  He would stay until May 2014!  In 40 Years in a Mousetrap: My Walt Disney World Career in Words and Pictures, Ackert outlines how a young man moved from New York to Florida beginning a career at Walt Disney World.  Ackert would start at the Magic Kingdom as a ticket taker, tearing admission tickets to show entry to the park instead of the use of electronic scanning devices.  Later he would move onto the Magic Kingdom and Epcot kennels as he cared for the dogs, cats and other miscellaneous pets of guests in the park.    And finally he relocated to the newly introduced Disney-MGM Studios where he would be a host at both the Great Movie Ride and his final posting of Star Tours.  Along with discussing his responsibilities with these roles he also shares celebrity encounters and off hour activities available to cast members in Orlando.

I really liked 40 Years in a Mousetrap.  I found Ackert to be very humorous and lighthearted, which made it easy to pick the book back up again between readings.  And being a mature adult, he gives a reflective perspective that other younger memoirs cannot provide in depth.  Ackert did not spend 3 to 9 months in the park with the commentary of how it impacted him.  No, Ackert gave a career to the parks and can reflect on not just how that time changed and built him but also how the resort changed over the years.  A good example is the Disney College Program, since he witnessed the use of it for years he provides an informed outsider’s perspective that some potential candidates should really take into account!

Ackert and the scope of his career really does provide a fresh take in a memoir.  He can discuss what old Orlando was like, including the seedy side.  This is an Orlando I have heard co-workers in Betweenland discuss but Ackert can confirm.  He provides insight into how the original ticket takers worked and managed their workflow.  He takes readers inside the kennels, which I have never seen in other books.  It becomes clear quickly this is a very unique operation.  And while Ackert held a variety of roles, they were all roles that worked directly with guests which makes it clear that one can sustain a career in these roles.  Finally this is really the first book I have read that discusses guest facing cast member retirement including benefits and the fact that Disney gets you a cake.  I will admit when I have read of young adults being stressed out about losing costume pieces I have little moral support since they should be more responsible.  When Ackert does his last check in I find myself tense since he could have lost items he could not even remember in his four decades.
I found 40 Years in a Mousetrap: My Walt Disney World Career in Words and Pictures really fun and enjoyable.  I would recommend that you read like me on a Kindle device, with a lower price point.  Ackert is fun and informative about his years at Walt Disney World, highly a Walt Disney World that is both foreign and familiar to many readers.

Posted by Between Disney at 6:21 AM