Between Books - I Saw Ariel Do a Keg Stand 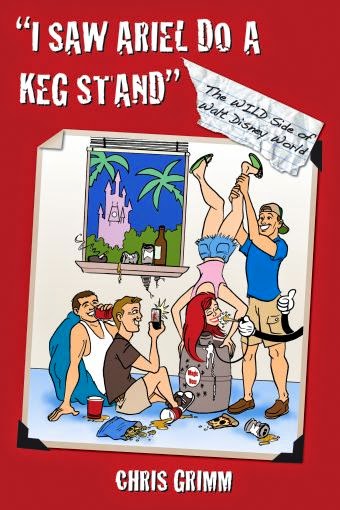 If you are considering the Disney College Program you need to do your research.  Step one is considering which books you want your parents to read as you gather support, likely financial, to enter this program.  But then you might want to also think about which books you want to read but forbid your parents from ever seeing!  Because in a world of young adults, some of drinking age, some stories are rated a little bit more than PG-13.

In I Saw Ariel Do a Keg Stand: The Wild Side of Walt Disney World by Chris Grimm outlines the author's semester working as a lifeguard at the Walt Disney World Resort through the Disney College Program.  Grimm discusses why he chose to enter the Disney College Program, a decision that will seem especially odd since he did not grow up Disney obsessed kid.  He follows with his preparation in moving to Orlando and the all-important chore of room-mate first impressions.  Grimm's story is then dominated by parties, parties,  girls, parties, drinking, parties, girls and parties.  He clearly got as much as he could from the social aspect of the program spending time with his roommates, co-workers and his new found friends the Spanish Mafia (a group formed to participate in a massive weekly drinking game).  Grimm follows his time at Walt Disney World with a description of a trip to Spain where he spent time with his teammates from the Spanish Mafia.

I Saw Ariel Do a Keg Stand is not a book I would hand the Between Tween.  Grimm is very honest and explicit about his experiences, and I do mean explicit.  He details numerous parties including his intense drinking, as someone who was not drinking age at the time.  Grimm also outlines his philosophy on picking up girls, a technique he learned as he came out of his introverted nest.  And that includes the numerous hook-ups that these tactics brought him.  He discusses casual sex throughout the book, and there are no fairy tale romances to be found in his story.  Some of his descriptions of sexual encounters are highly detailed and have to be labeled erotic.  This is not a book for everyone and all age ranges.  Though I am sure for those looking to read about the social side of working in the Disney College Program this book will be a hit.

The odd thing about this book is even if you do not agree with Grimm's choices, much like his father, you cannot help but like him as you read through the book.  He writes with a very straightforward manner that helps you like him, despite the fact he is making out with as many young ladies as possible.  Fathers should beware.  Grimm cares deeply for his friends.  He does not intend to hurt anyone, which means he is clear about his intentions with his numerous encounters.  And you as a reader want to see him succeed socially.  Though as a middle aged man I would like to see Mr. Grimm settle down...wait did I just become his dad?

In many ways older readers can understand books about the Disney College Program.  All of us have generally had that first experience, be it college or first apartments, where we were free to express ourselves for the first time without parental guidance.  For some it is party, for others it is hard work.  But for all of us it is likely a balance.  Grimm in I Saw Ariel Do a Keg Stand stresses one aspect of his life in the Disney College Program, the party.  There are some brief mentions to his work as a lifeguard which he appears to have enjoyed.  But all of us one way or another understand this life phase and a book like this allows us to remember our own walk, even if Disney was not involved.

I Saw Ariel Do a Keg Stand is not a book for everyone.  Though those within its audience are sure to chuckle as they read the book or hope they can duplicate similar experiences.  It serves as a fun, quick and enjoyable read.  For those on the fence and members of Kindle Unlimited, you can dip your toe in by borrowing the title for free.  As for me, the Between Kids are now barred from ever going to Walt Disney World without me!  But that's because they are not allowed to have fun without me!


Review Copy Provided by Theme Park Press
Posted by Between Disney at 6:24 AM