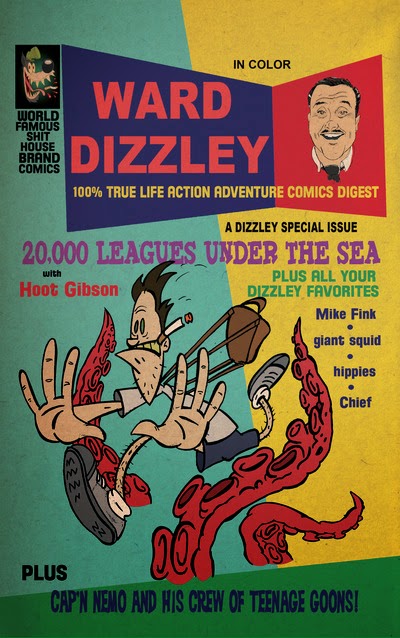 Ward Dizzley is back, or at least Hoot Gibson (Dave Ensign) and his tales of urban adventuring at the Walt Disney World Resort are in Ward Dizzley's 100% True Life Action Adventure Comics Digest #2.  The issue opens with a fictional introduction by Ward Dizzley, which serves as a tribute to Hoot Gibson's partner and late friend Chief.  This is followed by a story about an odd cast member at the Columbia Harbour House.  The second tale recounts guests doing drugs in the 1970s and stumbling into the submarine ride.  This is followed by two stories of Hoot Gibson sneaking into the show building of 20,000 Leagues Under the Sea with his friend Chief and another friend Mike Fink.  Along with the illustrated stories the comic includes ad parodies of Disney parks products and a collectible page of the "Mean People of the Magic Kingdom."

This comic is not for the kids.  It features profanity and adult situations.  The Between Kids are several years away from reading this illustrated title.  And superhero comic books fans are likely to not be as interested.  The stories themselves glorify urban exploring and humor.  And the dedicated audience that Hoot Gibson has gathered will surely enjoy this second issue.  The illustrations are cartoonish and fit the mood of the stories. Personally, I enjoy the humor of the ads the most since they capture the vintage feel of old comic advertisements and have a Saturday Night Live bit to them.  Overall, the audience of the title are those who like humor and stories of misbehavior on Disney property.

The comic sells for $6, but a Kindle copy can be purchased for $3.99.  For those on Kindle Unlimited it can be borrowed for free which is what I did.  And I believe that the cheaper options are the paths that most readers should select.  Though Hoot Gibson fans will want the autographed physical copy.

Ward Dizzley's 100% True Life Action Adventure Comics Digest #2  will likely give most adults a laugh with either the stories of the ads.  But the key here is to remember to come with a sense of humor while keeping the kiddies reading Figment!