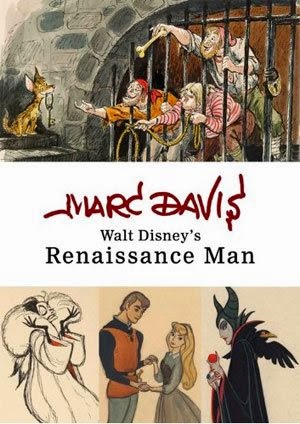 As I have become more and more familiar with those that make the magic, the late Marc Davis has become my favorite Imagineer.  His ability to mix fun with interesting designs continues to help The Jungle Cruise, Pirates of the Caribbean, and The Haunted Mansion.  I have often said on my list of literary wants is a volume that captures all of his interests from animation to the theme parks and beyond.  And now we can finally say that title exists.

Marc Davis: Walt Disney's Renaissance Man provides an artistic biography of Davis' life.  The artist's journey is documented by numerous authors, including some who knew the man, including John Canemaker, Andreas Deja, Pete Doctor, Marty Sklar and Marc Davis (yes, I said Marc Davis).  Each author takes up an aspect of his career from his own early animal studies, Davis the art teacher, animation, Imagineering, Davis' fine art and more.  Davis' own chapter is an excerpt from an unpublished book in which he discusses anatomy and motion.  Author Mindy Johnson provides a chapter that will delight Disney fans, "The Divine Miss Alice", which provides a biography of Davis' widow Alice who is a legend in her own right.  The entire volume is wonderfully illustrated with Davis' work, much of it coming from the Alice Davis Collection.

First and foremost what strikes a reader is the art.  The book has over sized pages which show off a master artist and draftsman's efforts.  A common theme amongst the authors is Davis' flawless representation of movement, and his personal sketches of football games and dancers shows that clear ability to visually communicate movement with static pictures.  The inclusion of early drawings, including those done on Butcher paper are exciting, as one feels they are uncovering Davis' early works.  And the included Disney Theme Park images will delight.  My personal favorites include concept art for the Western River Expedition which show that Davis planned a ride full of puns.  But the concept art for the Haunted Mansion art gallery found on pages 138 and 139 made me wish the page was even bigger so the crease did not have to interfere with my view of the masterpiece. Speaking of masterpieces, the book provides something that Disney fans are not used to, numerous samples of Davis' fine art.  These pieces, be it a tree study or a spirit house from his Papua New Guinea trips show Davis' ability to work in numerous formats and styles.

The chapter text, usually 3 to 5 pages long, present Davis' well-rounded life.  My favorite chapters show a teacher, a man at play, and a husband.  "Marc as Teacher" by Bob Kurtz presents Davis the instructor.  One really can see the ease at which Davis could quickly form an image with expert lines.  And you get insight to his teaching style.  For me a highlight is seeing something I thought no longer exists, photographs of some of his chalkboards.  "Papua New Guinea and the Pacific Islands" shows a man looking to learn more about his world and his art.  But his sketches, including a canoe mishap allow us to see a man with a sense of humor.  And of course, his art from his trips is spectacular.  And along with his whimsy, the accompanying text shows that even in his later years he still had a vivid imagination.  Finally, "The Divine Miss Alice" gives us a biography of Alice Davis.  I have personally gotten so used to hearing Alice Davis talk about Marc Davis that it was refreshing to see her own work highlighted.  Additionally, the images help document a true romance.

Marc Davis: Walt Disney's Renaissance Man is a book I have wanted on my Between Book shelf for awhile, well before it even existed.  This volume is a must have for Marc Davis fans, Disney animation historians and Disney Parks enthusiasts.  In one volume Davis fans can reference his entire art career and see why Walt Disney considered Davis his Renaissance Man.


Review Copy Provided by Publisher
Posted by Between Disney at 6:09 AM