Between Books - Imagineering An American Dreamscape 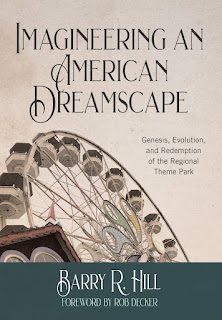 I spend a lot of time between Disney dreaming about a good Disney Parks day. But, I have rarely explored the parks between Disneyland and Walt Disney World. And I hoped Imagineering An American Dreamscape could better inform me about regional parks and perhaps even get me excited to visit one.

Imagineering An American Dreamscape: Genesis, Evolution, and the Redemption of the American Theme Park by Barry R. Hill details the history of the American theme park from the late 19th century to the recent past. Hill describes the types of parks that existed before Disneyland, how they influenced Walt Disney’s park, and how Disneyland would then impact regional entertainment after its popularity grew. From early rides like steeplechases to high-speed roller coasters, Hill describes the economic measures needed to attract and then retain visitors to an audience familiar with larger national parks. The tale is one of copying Disney’s and other successful models, followed by a need to change due to the economics of the market. And much of this is followed by economic shifts as parks closed and consolidated as economics pressured the local park owners who could not retain growth or saw the need to add big-ticket attractions to their parks outstripped their pocketbooks.

I enjoyed Imagineering An American Dreamscape. It is well-written and engaging. It is extensively referenced, showing that Hill has deeply researched his topic. Sometimes, he does move from the historian's tone to one of nostalgia. But these tone shifts show his deep love of this topic. Hill introduced me to parks like Astroland, Great America, King’s Dominion, and so many more. He also does an excellent job of showing how regional parks like Six Flags Over Texas impacted the Disney experience today, moving from attraction tickets to a single admission.

Hill notes that the entertainment experience is becoming blurred. Regionally we may not be able to determine what is a theme park, amusement park, mall, or museum in the future. Hill shows us clearly how economic factors have impacted the history of these experiences, their need for them in our regions, and the excitement of enjoying these venues.

This post contains affiliate links, which means that Between Disney receives a percentage of sales purchased through links on this site.
Posted by Between Disney at 11:33 AM