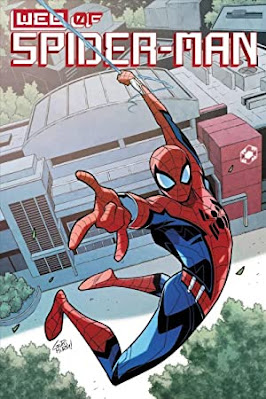 Here I sit, stuck between two Disney parks, and it has been years since I have been able to visit Orlando or Anaheim. And one of the dreams that has become a reality since my last visit to the Disneyland Resort is Avengers Campus. Yes, I want to go there! Marvel and Disney with W.E.B. of Spider-Man, which collects the five single issues of this comic title, are trying to get myself and my younger self motivated to visit the new land and WEB SLINGERS: A Spider-Man Adventure.

In W.E.B. of Spider-Man, writer Kevin Shinick and artist Alberto Alburquerque introduce Peter Parker to the Worldwide Engineering Brigade (W.E.B.) established by Tony Start to gather great young thinkers together to solve the world’s emerging problems. W.E.B. members include Harley Kenner from Iron Man 3, Lunella Lafayette the Moon Girl, Onome, a genius girl from Wakanda, Doreen Green the Unstoppable Squirrel Girl, and Amadeus Cho also known as Brawn. The youngsters are joined by the Spider-Bots found in the ride. The team is drawn into a battle with some familiar-faced villains attempting to steal key data from W.E.B. Peter struggles in this adventure to determine whether he or his alter ego, Spider-Man, best fits within the W.E.B. team dynamic.

This title is for 10+. And honestly, it is for that age, and a little bit older, this best would work. As an adult, I found the lack of foreshadowing for the big bad to be a major miss. And I think for young readers, the lack of foreshadowing and general low visibility of this villain is problematic. I do not believe the ten-year-old crowd knows who the villain is and may not care about them. I think all readers needed to Scooby-Doo this where we take off the mask and yell it was you! But that is lacking. The story is what you need and expect from a comic from this age, with Alburquerque providing very professional and well-done art. I can see an 11-year-old reading this a few times before hitting the park, but it will likely never be any adult readers entry comic to the ride, where the movies should be taking that role for most of the audience.

W.E.B. of Spider-Man is a story with a hiccup or two. But it performs as needed by creating a comic story accessible to young readers. And best of all, from a Disney synergy window, it likely will make some young people feel closer to the Spider-Man ride and the backstory and lead to pleas to get into line!

This post contains affiliate links, which means that Between Disney receives a percentage of sales purchased through links on this site.
Posted by Between Disney at 12:41 PM