Between Books - They Drew as They Pleased: The Hidden Art of Disney's Late Golden Age The 1940's - Part Two 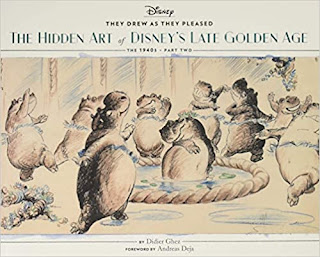 Short Version - They Drew as They Pleased by Didier Ghez is really good.  If you like or love Disney animation and books you will want very volume.  With volume three, that summary can continue!

Long Version - They Drew as They Pleased: The Hidden Art of Disney's Late Golden Age The 1940's - Part Two by Didier Ghez is the third volume in this art driven series.  Ghez again features treasures from Disney's story artists.  This volume focuses on members of the short lived Character Model Department in the 1940’s under the leadership of legend Joe Grant  The artists including Jack Miller, Campbell Grant, James Bodrero, and Martin Provensen may be a group that honestly are not familiar with every Disney fan.  But they were a group who contributed significantly to the look and feel of Disney features like Fantasia and animated shorts in the 1940s.

For me, I really focused on Miller, Grant, Bodrero, and Provensen.  The Character Model Department  was only functional for a few years.  And they were often resented by their animation colleagues for their ability to play and dream.  But the group was made of high-quality artists, many of them finding their way to other commercial avenues after Disney.  And they were extremely close with Grant, Bodrero, and Provensen living together, playing together, and seeming like a real life Three Musketeers.  While there were several projects discussed, I found myself struck with the differences between Fantasia and Victory Through Air Power during World War II.  Fantasia concept art from these artists is true fine art.  But for the air power propaganda film, well there is no concept art in these brilliantly illustrated paintings.  As this Disney passion project bored them with charts and arrows and in some cases drove them one step closer to leaving the studio even joining the war effort.  Leaving the studio is a true theme as it is shocking yet again how short some of these masters’ tenure at Disney was.

Yes, They Drew as They Pleased: The Hidden Art of Disney's Late Golden Age The 1940's - Part Two is a volume that history loving Disney fans want and need.  Well written and beautifully illustrated it is yet another joyful read.

Posted by Between Disney at 2:20 PM