Between Books - The Making of Walt Disney's Fun and Fancy Free 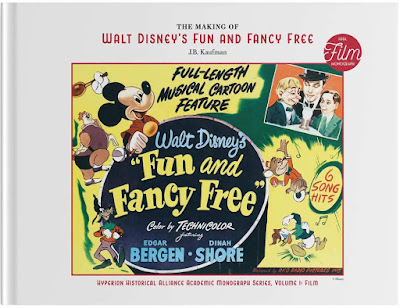 As a fairly busy person, I have never to my remembrance watched Fun and Fancy Free.  Okay, that’s a little bit of a lie.  I remember segments of this 1947 package film as it was taken apart to provide television and school’s shorter segments, specifically Mickey and the Beanstalk.  But it is honestly a film that I do not know a lot about or have a deep experience with.  I mean I likely have an old copy picked up and maybe unwatched from my college years.  So I was excited that the Hyperion Historical Alliance’s first monograph was a blind spot in my Disney knowledge.

The Making of Walt Disney’s Fun and Fancy Free by J.B. Kaufman is truly the definitive book on this Disney feature.   Kaufman starts his story in 1941 as Walt Disney sought new stories in the midst of global war to justify his expanding studio.  One of the potential stories that Disney tasked to his staff was the development of Sinclair Lewis’ “Bongo” a tale of a circus bear meeting wild bears in the wild.  A story with only three main characters; Bongo the circus bear, Silver Ear a wild female bear and Lump Jaw a male bully bear was going to take a lot of development to create an animated film.  Kaufman highlights the starts and stops in the story including changing development leads, changing studio priorities and story problems which stretched out the development of the film.  For examples, as story personnel changed so did characters, endings and even how Bongo found himself in the forest.  Next Kaufman transitions to Mickey and the Beanstalk, a story that Walt Disney had visited before.  As early as 1938, Disney had considered producing a version of “Jack and the Beanstalk” again as a Mickey Mouse feature which could help put the studio on stronger financial grounds.  This feature was stalled in the World War II studio activities and revived again in 1944, among the projects like “Bongo” that Disney hoped would bring his studio in to the post-war world.  And with the war ended in 1945 and Disney needing to put a feature in theaters, the decision was made to place Bongo and Mickey and the Beanstalk together for one theatrical released feature.  The new fun spirited Fun and Fancy Free was to provide a Disney a more economical feature which already had years of development behind it.  This new film would be promoted heavily with both musical numbers found in the film and with Mickey Mouse’s 20th anniversary, a year early. After its initial release, the film would separated into smaller segments for further release in other avenues.

Kaufman’s work is solid, informative and entertaining. The Making of Walt Disney’s Fun and Fancy Free is full of images.  The book does not just tell you about the evolution of characters but shows you.  And along with concept art, Kaufman shows us the artists crafting the film’s development.  But my biggest concern about image heavy books is the narrative.  Here, Kaufman does not scrimp on his words giving a strongly researched historical narrative.  For such an image heavy book, the words provide equal value.  The Hyperion Historical Alliance has stated they wish to support image driven books which also have historically strong research.  This first volume definitely meets that goal!  And I as a reader look forward to seeing future volumes.

In the age of Disney+, Fun and Fancy Free is available at anytime to me.  Though I think I may still have a VHS copy of it…but a streaming channel seems so much easier for searching and starting/stopping.  J.B. Kaufman has given me the excitement to watch it again for the second or third first time in a whole new historical light.

Posted by Between Disney at 1:56 PM