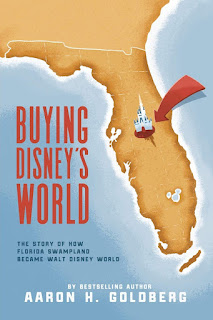 I had heard some great buzz about Buying Disney's World, so I set myself up to enjoy this text on a long bus ride.  Yeah, a bus!  As I attended a trip with some of my favorite people I hoped that this journey into Florida of five decades ago would keep my interest and make the miles pass.  But in the end it got my interest in other ways as I began to question how some of the research was used.

Buying Disney's World:The Story of How Florida Swampland Became Walt Disney World by Aaron H. Goldberg provides a fairly straightforward account of Walt Disney's interest in developing a East Coast city of tomorrow in Florida.  Goldberg breaks down the decisions of where to build in Florida, the steps taken to purchase the massive number of acres that Walt Disney wanted for his new project and Roy Disney's leadership in completing Walt Disney World.  The style is highly accessible with readers lacking Disney or in some cases legal knowledge able to understand the complicated steps taken to build the Florida resort.

For me Buying Disney's World is a mixed bag.  The text is very approachable and often engaging.  Goldberg really underscores the efforts and drive of two men in completing this park.  First, Walt Disney the man who would never see the finished dream who chose the site and had a vision that went beyond a theme park.  Second, Roy Disney, who cancelled his own retirement to build his brother's dream to the point of demanding that it open on time.  These personal aspects are fully drawn out and easy to see in the author's prose.

But I have concerns about the scholarship.  This monograph is full of extensive citations and provides a clear message, I am a serious historical study.   But I worry about how the author uses external sources.  One chapter includes what is in effect an extensive transcript of "The Florida Project" film which extends for pages and pages.  This text expands the chapter size and would perhaps could be better placed in an appendix with Goldberg providing readres analysis of the film instead.  But the piece that I found me scratching my head was another long quote, this time from Walt Disney discussing his love and respect of Roy Disney.  The citation is not to the original source of the quote.  Instead it is to a secondary source written about the brothers by Goldberg for a youth audience.  It wonder in this work what citation was provided, as it feels odd with the author citing his own work and for a less academic minded audience.

For me, Buying Disney's World is an accessible account of the development of Walt Disney World.  It was clear and at times emotionally engaging.  But for a more academic view of this time frame I still rely on Chad Denver Emerson's Project Future.  I hope that Buying Disney's World can draw readers into this fascinating story so they explore this topic in even greater detail.

Posted by Between Disney at 7:49 AM