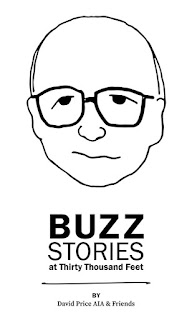 Buzz Stories at Thirty Thousand Feet by David Price AIA and Friends is a book that provides greater insight to the business practices of a Disney legend, Harrison “Buzz” Price. The book is a series of chapters written by the elder Price and his colleagues collected by his son. David Prices also adds his own chapters and insights to the mix and sums up for the reader what can be gleamed from his father’s career. The typical chapter includes a Price colleague discussing how Buzz recruited him for a project, how Buzz used his group development summits or charrettes and the impact that Price had on the author. Readers from this window get insight into the man that Price and how he impacted the themed entertainment industry often beyond his work with Disney.

Buzz Price is typically seen as a numbers man. In fact, he used numbers in the title of his own autobiography to feed into this stereotype. But what becomes clear is that Buzz went beyond the numbers. After being the guy who helped Walt Disney choose Anaheim of Disneyland, he continued his successful career on location-based projects globally. Often, he used his charrette technique, which David helps explain the origin of, which allowed him to bring together subject matter experts and the client together for a few days of intensive planning. While Buzz did his homework and knew his math, what also is clear is how he navigated relationships within these meetings. In fact, the client’s end goal often was the important starting point for where the project went. And Buzz was able to help his clients thoughtfully plan their experiences while the elder Price helped mentor the next generation of themed entertainment planners.

Buzz Stories at Thirty Thousand Feet was not fully what I expected. Different viewpoints and authors also provide an uneven experience for a reader. But at the heart of the matter is the man. And this book really is a tribute to a theme entertainment legend, and the reader can escape the numbers to see a relationally based leader who was funny and compassionate.

Posted by Between Disney at 3:22 PM