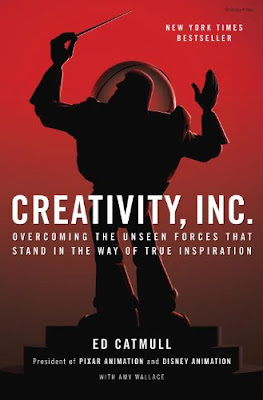 Creativity Inc.: Overcoming the Unseen Forces That Stand in the Way of True Inspiration by Ed Catmull with Amy Wallace provides Catmull's insights into management and animation history.  Many readers may assume that Creativity Inc. is either an autobiography or a personal history of Pixar.  And while there are elements of both, the text is really Catmull's reflections on both innovation and management.  Catmull uses history and personal narrative to provide other managers and innovators insight into his own career.  The episodes reflected on include his own early education and steps into animation, the establishment and then sale of Pixar, success under the ownership of Steve Jobs and later its purchase by Disney including expanded roles at Disney.  His review of history includes his relationship with the at times mercurial Jobs, the Pixar Brain Trust and it's function, and how Catmull and John Lasseter transitioned from Pixar to Disney leadership.

Creativity Inc. is a really good book!  Honestly it is something that managers and innovates need on their bookshelf not just Disney fans.  Catmull is largely honest about his mistakes and missteps that Pixar took under his direction.  Not everything Catmull attempted was a success, including attempts to revolutionize production.  And he shows us how a company losing its vision and edge can at falter after early overwhelming success.

One of the chief themes in Catmull's leadership is candor.  Catmull and John Lasseter require it.  They make it clear what candor is and is not.  And how candor can be squashed by a inappropriate tone.  One of the examples used throughout the book is the famed Pixar Brain Trust.  Catmull describes its rules including that Pixar directors can and do ignore its advice.  And he explains that everyone is able to provide guidance.  These sessions are meant to hone the director's vision and improve the story.  And largely they do help Pixar to make some of the best animated features in the world.  If I was to criticize Catmull for anything it would be that he does not address claims that the candor of these meetings is not as described, with some not always feeling like they are able to share.  Also, I would say that Catmull does ignore some negative elements of Pixar history like the removal of Alvy Ray Smith, a Pixar co-founder.  In short he is not always candid.

One of the things that I found fascinating is that Catmull made sure with his transition to Disney leadership that he kept the two animation units separate with clear separate structures.  The two would not mix or help each other.  That way they each could retain separate and clear identities, goals and projects.  Additionally, they chose to retain the one Disney animation executive everyone thought Catmull and Lasseter would remove, Andrew Millstein the head of Circle 7 Productions which produced sequels.  An early goal for the new leaders was no more cheap sequels.  Instead they made him general manager of the studio as he caught their vision.  Still there missteps as Catmull and Lasseter worked to overcome Pixar concerns they had lessened their attention on Pixar.

Creativity Inc. is a great management and innovation book.  I could easily see reading it on a regular basis with using it for occasional innovation advice.  The book helps reinforce, in his own words, Catmull as a leadership and innovation leader.