Between Books - Cleaning the Kingdom 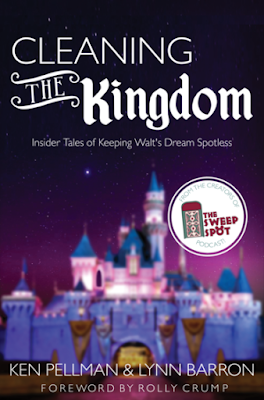 Can janitors be an interesting topic?

Despite a really horrible one semester one bathroom custodial shift, I am going to say in some circumstances yes!   And seeing a book about Disneyland’s famed custodial cast members is probably one of the most interesting Between Book topics I had seen in some time.  I knew this for sure, it was not going to be your typical guidebook!

Cleaning the Kingdom: Insider Tales of Keeping Walt’s Dream Spotless by Ken Pellman and Lynn Barron provides some custodial history, a layout of how Disneyland was cleaned and personal stories from the men and women in White.  Pellman and Barron spent years in Disneyland’s custodial department from the 1980s to 2000s.  The two former custodians are passionate about what they did and the legacy that the white clothed crew has left in the hearts of guests.  The 400 plus page book is clearly the most exhaustive book ever considered about these cast members.  The authors open with a historical review of Disney’s custodial services including the key cast members who made the Custodial department the legendary unit it became.  The authors then share in great depth their experiences including their typical day, how they cleaned Disneyland and an exhaustive land by land breakdown of the park and the services needed in each area.  Amongst their report of what it was like to be a day custodial employee are personal accounts from themselves and friends about guests, cultural changes, and of course the chapter of the gross which readers are warned may not be for everyone (you will not be surprised to find the worst bodily fluid situations in this chapter).  The two close the book discussing why they left Disneyland and reflecting on how their experiences impact them to this day.

Let me just start with this simple observation.  I now am noticing dustpans, including one that I recently used, evaluating them on their material make-up and their usefulness.  I am sad to say that I found my most recent sweeping lacking, as I do not believe my plastic pan would have been able to remove gum!  So if asking the question if a book about custodial could be interesting, the fact that I’m thinking about dustpans really answers that question quickly for me.

Another aspect of the book that really interested me was the short but complete history of Disneyland custodial services.  The history includes the names of important staff and a history of the department.  For me this chapter was a great touch giving a very serious historical view of the department.


As someone who was evacuated once behind stage and seen a packer and recycle sorting, I found it very interesting to read a breakdown of where the custodial areas were and how they were accessed.  And I became very impressed with the hard work and dedication that Disneyland’s janitors historically have worked with.   I liked leaving the book with a better understanding of where does the trash go, what sweeping lines entails, how Indy is treated special and how urine is urine regardless of source.

I do have some critiques.  The authors identify often who is writing, and sometimes to keep my reading flow going I really could have been satisfied with a “we” instead of “Lynn” or “Ken”.  However I assume their podcast fans would not agree with me.  And on occasional the material seemed repetitive.  But that is likely due to the very through nature of the book.

Cleaning the Kingdom: Insider Talesof Keeping Walt’s Dream Spotless by Ken Pellman and Lynn Barron is a book that Disneyland fans will clean up on.   It feeds into fans who want to know all things Disneyland by showing the dirty side, literally, of the park.   From their observations about in park developments such as wardrobe changes, their personal thoughts about Disney and their detailed explanations of cleaning the park, fans will want this volume with a very different point of view.

Posted by Between Disney at 6:55 PM